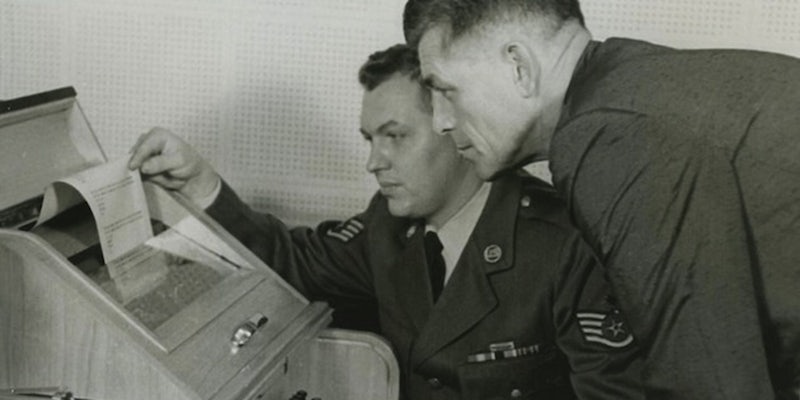 A photo history of the NSA, from its once-secret archives

For its recent 60th anniversary, the National Security Agency put together an interactive timeline. Here are a few notable excerpts.

The NSA trumps even the CIA as the nation’s most secretive intelligence agency. Though it first began shape in the 1930s, its existence wasn’t even publicly acknowledged until the 1970s. But even top secret spy programs, it turns out, like to keep photo albums.

Last year, in celebration of its 60th anniversary, the NSA published an “interactive timeline.” The crown jewel is a stockpile of photos, many of them previously kept secret, from its own archives. It’s chock full of fascinating images taken throughout the agency’s history, beginning in the 1930s, when the nascent proto-NSA was still called the US Signal Intelligence Service (it would be officially become the Armed Forces Security Agency in 1949 and the NSA in 1951).

The NSA, it turns out, wasn’t always so intent on spying on Americans—the NSA began as a secret cryptologic service that broke foreign foes’ code in wartime. So, to better introduce everyone to our clandestine spy cabal that’s currently spying on America, let’s flip through their digital scrapbook.

The proto-NSA’s earliest missions included deciphering communications from both Nazi Germany and the Japanese Navy, and to encrypt American messages.

M-138, a strip cipher device that allowed the use of multiple alphabets to encipher messages.

Of course, Eisenhower was in on it.