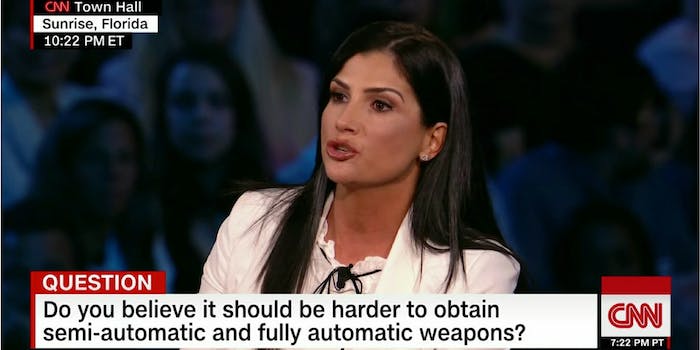 During Wednesday’s CNN town hall on gun control following last week’s Parkland shooting, moderator Jake Tapper asked Loesch why it was that the NRA doesn’t support raising the age limit for purchasing rifles from 18 to 21.

The specific measure has been considered by President Donald Trump and supported by Republican Florida Sen. Marco Rubio among others, and could have been a preventative measure in stopping 19-year-old alleged Parkland, Florida, shooter Nikolas Cruz from obtaining the weapon that allowed him to kill 17 students and teachers at Marjory Stoneman Douglas High School last Wednesday.

In response, Loesch told Tapper that the NRA doesn’t support the measure because its members believe that people who can vote and serve in the military at 18 should also be able to own rifles, and that rifle ownership would be valuable for young women to help defend themselves against sexual assault and rape.

Eliciting a cacophony of booing, Loesch said the question reminded her of Kimberly Corban, a woman who was brutally raped in 2006 at the age of 20 by someone who had broken into her apartment. Corban had evoked her own story and regrets of not owning a firearm when she challenged President Barack Obama at a 2016 CNN town hall on “Guns in America.”

During that town hall, Corban told Obama that as a rape survivor and a parent, “it seems like being able to purchase a firearm of my choosing, and being able to carry that wherever [my family is] seems like my basic responsibility as a parent at this point,” and asked him why his administration couldn’t see that gun regulations were preventing her from defending her family.

At the time, Corban told the Washington Post that she felt Obama dodged the question and said she wasn’t telling other people they needed to carry firearms, but wanted respect for the right to do it herself. And at Wednesday’s town hall, Loesch drove home that point.

“I’m also thinking of young women…One of the things that [Corban] speaks out about widely now is how she wished he would have had the ability to have some sort of a shotgun, whatever it was, to defend herself,” Loesch said to a restless crowd. “We have to think about individuals.”

However, when it comes to guns being able to keep women safe, the numbers tell a different narrative. According to studies from the American Journal of Public Health, American Journal of Medicine, the FBI and more, as compiled by the Everytown for Gun Safety Support Fund, 50 American women are shot to death by intimate partners each month on average, and 4.5 million American women alive today have been threatened with a gun by an intimate partner, with near 1 million women having been shot or shot at by an intimate partner.

Additionally, the presence of a gun in a domestic violence situation makes it five times more likely that the woman will be killed, and the U.S. is the most dangerous developed country in the world when it comes to gun violence against women.

On Twitter, sexual assault survivors and activists lambasted Loesch’s effort to connect firearms to sexual assault, seemingly overlooking just how often women themselves are subject to gun violence and domestic violence at the hands of gun owners, and how the numbers show that having a firearm in the household doesn’t necessarily make women safer.

To the NRA, Dana Loesch, and everyone else who keeps pushing the "guns protect women from rape + violence" argument:

That's because the NRA tried to use a rape victim as a human shield and the crowd isn't stupid https://t.co/WjZfsxK9Fh

Until the NRA makes it harder for domestic abusers to access guns, they're not allowed to talk about survivors of sexual violence needing firearms or not needing firearms. Sorry, I don't make the rules. Don't use rape survivors as pawns, bye.

Several critics, including Women’s March member Sophie Ellman-Golan and reproductive rights advocate Renee Bracey Sherman, evoked the stories of Marissa Alexander and Bresha Meadows. In 2012, Alexander was convicted of aggravated assault charges after she fired a warning shot at her abusive husband when he threatened her after she gave birth to their daughter.

In 2017, 14-year-old Meadows took a plea deal after being charged with aggravated murder for shooting her father. Meadows had run away from home twice before, attempting to escape decades of abuse at the hands of her father suffered by her mother, herself, and her sister. After attempting to report her father to child protective services and being told there was nothing agents could do unless her mother reported her father for abuse, Meadows took matters into her own hands and shot her father.

When women and girls do shoot in the VICINITY of their abusers they risk imprisonment. See Marissa Alexander’s case. Bresha Meadows.

When DV and rape victims use guns to defend themselves, they wind up #SurvivedAndPunished

The NRA should ask Marissa Alexander how that works out for survivors of domestic violence and rape, especially women of color.#StudentsStandUp #CNNTownHallhttps://t.co/dGuPmoVLqa

It would appear that anti-gun critics, domestic violence statistics, and real-world application conclude that Loesch’s argument is more complicated—and often farther from reality—than she conveyed it to be at Wednesday’s town hall.