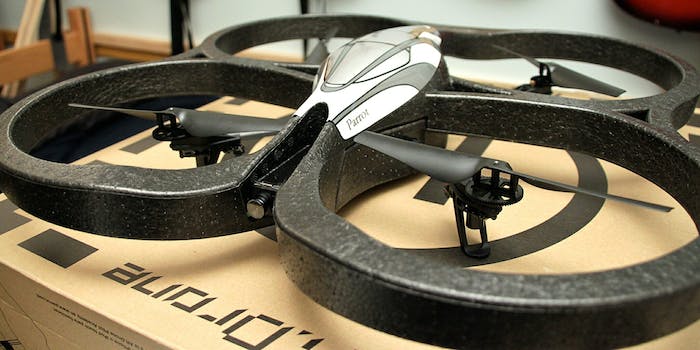 Weaponized police drones have landed in the U.S.

Some Americans have taken to shooting drones out of the sky, but now drones can start shooting back.

While the non-lethal status of drones’ weapons might sound better than if they were arming unmanned aerial vehicles with sawed-off shotguns, non-lethal weapons kill dozens of people every year. Tasers, for example, have killed 39 Americans so far this year, according to the Guardian.

“It’s really all about the commercial development, which is where all of this is heading.”

The bill does require a warrant to use drones for surveillance, except when used on along North Dakota’s 310-mile border with Canada to stop illegal entry into the country.

The bill originally banned police putting weapons on drones. However, as the Daily Beast reports, drone industry and police lobbyists succeeding in tacking on the weaponization part of the bill, which the bill’s original sponsors have objected to.

Republican state Rep. Rick Becker, the original sponsor of the bill, worries that the “separate” and “depersonalized” nature of drone pilots who are not on the ground and directly involved in a situation will have negative consequences on policing and citizens.

At hearings on the bill, the Daily Beast reported, organizations like the Association for Unmanned Vehicle Systems International and Grand Forks Regional Economic Development Corporation stressed the importance of legislation that doesn’t limit the “development” of drone manufacturing.

“It’s really all about the commercial development, which is where all of this is heading,” Keith Lund of the Grand Forks Regional Economic Development Corporation replied. “If [a law] is somehow limiting commercial, law enforcement development… that is a negative in terms of companies looking and investing in opportunities in the state of North Dakota.”