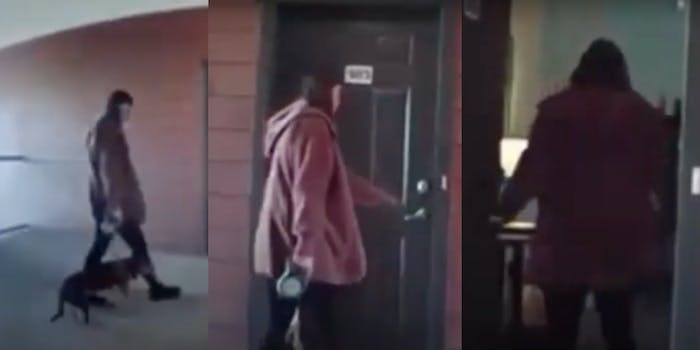 The video shows Jessica McCampbell snatching her dog by its leash and slamming it to the ground.

Police arrested a woman in North Carolina after a video surfaced of her brutally abusing her dog.

The video—captured on Ring—shows 28-year-old Jessica McCampbell snatching her dog by its leash and slamming it to the ground. Another video shows the dog being held and yelping in pain, according to authorities.

McCampbell was arrested and charged with the ill-treatment of animals, WCNC reports.

The abuse happened Monday, though police didn’t learn about it until they saw the video posted to social media later in the week. An online post gave details about the locations where the alleged abuse occurred.

“It’s a good thing that they’re not alone because people are always watching, someone always has a camera. So, it keeps people to stay in check, at least we hope it would,” Mary Beth Knapp with the York County Humane Society told Fox 8.

York County Animal Control said the dog is being held as evidence and is currently not up for adoption.