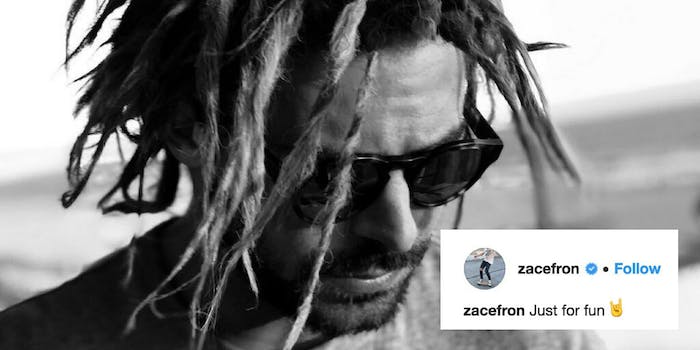 No, Zac Efron, you can’t wear dreadlocks ‘just for fun’

Yes, this is an example of cultural appropriation.

Zac Efron has always been a goofy-hunky fan favorite, from his High School Musical days to The Greatest Showman, but his glimmer is fading fast after a recent post on Instagram shows him getting dreadlocks “just for fun.” Critics of his latest look are accusing Efron of cultural appropriation, or using dreadlocks as an accessory or fashion statement without paying respect to the cultures that the style hails from.

In his post on Thursday, Efron is sporting a head full of medium-length, spiky dreads while wearing sunglasses and looking toward the ground like a clueless surfer-bro in a 90s movie. “Just for fun,” he captioned the pic, with a yellow “rock on” hand emoji.

Across Instagram and Twitter, Efron’s fans and critics are doling it out, either waxing about the ways in which his new ‘do is culturally insensitive and an exact representation of appropriation, or defending him and his hair, and asserting that he is being “appreciative” of the cultures from which dreadlocks hail.

“This is why you never extend invites to the cookout to early,” another joked.

Oh Lawds, the commentary in The Shaderoom has me dead on Zac Efron's "locs" pic.twitter.com/vliJiZETNi

lmao people saying Zack Efrons dreadlocks are "cultural appropriation" do people not realize that the Vikings, Celts, Germanic tribes, ancient greeks and many other cultures had dreads?? Jesus. #culturalappropriation #ZacEfron

Despite the kumbaya approach to “one culture,” we are not there in America; the historical context of Efron’s styling decision absolutely matters. According to Ebony, dreadlocks can be connected to several civilizations and races throughout history but became “synonymous with Jamaica” under Marcus Garvey’s leadership for the Rastafari Movement.

The difference between the hairstyle being used by white or Black people in the U.S., however, comes down to the way different races are treated for wearing it. While celebrities such as Efron, Justin Bieber, and Kendall and Kylie Jenner are praised for being “daring” with dreadlocks, Black celebrities such as Zendaya aren’t praised but are told they smell like weed and patchouli oil.

Meanwhile, Black people who aren’t celebrities face retribution for wearing Black hairstyles at school and at work. In the military, Black women were only recently allowed to wear their hair in dreadlocks. However, several courts have ruled that employers are allowed to ban their employees from wearing dreads.

Regardless of historical context, Black people are still discriminated against for wearing their hair naturally or in Black hairstyles, while Efron gets to sport the same style without getting the same negative reaction. And no, Black people wearing “white” relaxed hairstyles isn’t cultural appropriation—they’ve been required to adopt those hairstyles in order to assimilate and succeed in a white-majority society in the U.S., or be harassed and treated as “other” for refusing to do so.

Being that Efron doesn’t openly show appreciation or activism for the people who are discriminated against for wearing dreadlocks, and instead got the dreads “just for fun,” he still misses the mark. (The publicist company managing Efron did not immediately respond to the Daily Dot’s request for comment.)

Hopefully, Efron decides to read the comments of his inflamed post before going a day longer with his new ‘do.