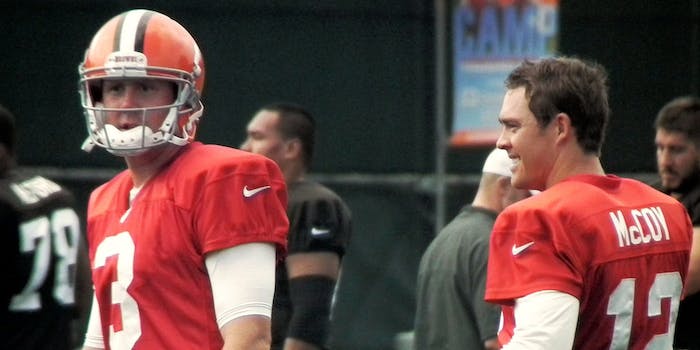 Why #NoMeansNo is trending among NFL fans

The message of “no means no” finally got some major attention during a primetime NFL game, but it had nothing to do with the NFL’s recent sexual assault and domestic violence issues.

ESPN Deportes reporter John Sutcliffe tried to interview Washington quarterback Colt McCoy right after his team’s overtime victory over the Dallas Cowboys, but Washington’s senior vice president of communications was having none of it. Tony Wyllie, who was in charge of getting McCoy off the field, had a job to do. He wasn’t going to let a reporter stop him.

When Sutcliffe insisted, Wyllie angrily shouted, “No means NO!” before leading McCoy off the field.

Muchas gracias @ColtMcCoy for The interview

While those fleeting moments after a rigorous football game gave sports Twitter plenty to laugh and scoff at, the irony that a message like “no means no” only trended after a six-second clip went viral instead of during a conversation about consent didn’t go unnoticed.

Here I thought #NoMeansNo was trending bc of an important conversation we should all have about sexual consent, but nah, it’s bc of sports.

So glad #nomeansno is trending for something as banal as football and not like, you know, awareness of sexual consent or anything.

The NFL has been scrutinized by critics, journalists, and sports fans alike for months about how it handles domestic abuse, particularly after Ray Rice’s indefinite suspension and its alleged response to those situations, and more NFL wives and girlfriends are speaking up about alleged cover ups.

In a move that feels reactionary, more than two dozen NFL players filmed a PSA speaking out against domestic violence that’s started to air during NFL games. At one point, one of them distinctly says, “No more, ‘She never said no.’”