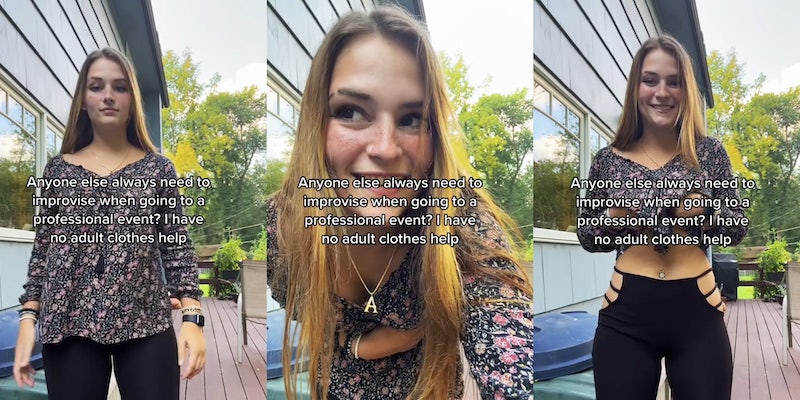 ‘PLEASE I WORE THESE TO MY GRANDMOTHERS FUNERAL’: Candidate has no ‘adult clothes.’ So she wears pants with cutouts to job interview

A TikToker says that because she has no “adult clothes” to wear to professional engagements, she wore black pants with cutouts at the waist to a job interview.

Meghan Miller (@meghannmiller) posted a TikTok on Sept. 10 asking if “anyone else always [needs] to improvise” with their clothes when attending professional events.

“I have no adult clothes help,” Miller wrote in her video’s overlay text. In her video, she is wearing black pants with cutouts at her waist under a long sleeved, flower-patterned shirt. Her shirt covers the cutouts on her pants.

In the video’s caption, Miller shared that she wore the pants to a job interview and that she got the job—”so the pants worked.” On Wednesday, Miller’s video had almost 475,000 views.

Miller identifies herself as 22 in her TikTok profile, meaning she’s a member of Gen Z, the generation that’s received significant media attention for its new take on office-wear. Gen Z’s take on business casual has been called “ultra-casual” and their attitude toward the office is categorized as doing away with the “formalities” that have traditionally been pillars of office culture (like email signatures).

Thus, Miller surely isn’t the first Gen Z-er to adapt clothes that they might wear with friends or out on a weekend to workwear—and commenters on her video shared their hacks for making the clothes they have work for the office.

@kaylee100802 commented that she tucks “turtle neck crop tops in the most high waisted pants [they] own for work everyday.”

@juliekoh1 wrote that she wears mini dresses as knee length skirts by tucking the dresses straps in.

@jennashefts1 commented that they simply try to stretch out their black crop tops for work.

Others said that they borrow clothes from their parents, wear tank tops under shirts, and/or have one dedicated professional outfit.

The Daily Dot has reached out to Miller via TikTok comment.