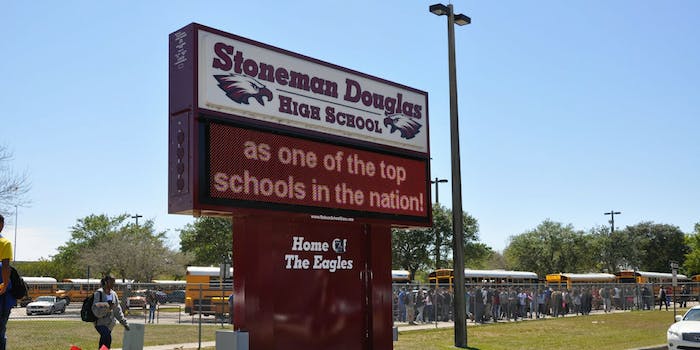 The FBI had previously been warned of a school shooting comment made by a YouTube user “Nikolas Cruz” in September.

According to BuzzFeed News, 36-year-old Mississippi bail bondsman and vlogger Ben Bennight alerted YouTube and the FBI on Sept. 24 about a comment left on one of his videos from the user, who stated, “I’m going to be a professional school shooter.” Screenshots provided to BuzzFeed shows the comment, as well as Bennight’s email correspondence to the bureau.

Bennight told the publication that he emailed a screenshot of the comment to the bureau’s tips account, and that agents got back to him immediately, coming to his office to conduct an in-person interview the next day, Sept. 25.

“They came to my office the next morning and asked me if I knew anything about the person,” Bennight said. “I didn’t. They took a copy of the screenshot and that was the last I heard from them.”

The development comes less than 12 hours after 19-year-old Nikolas Cruz allegedly opened fire at Marjory Stoneman Douglas High School in Parkland, Florida, on Wednesday, killing 17 people, making it one of the deadliest shootings in modern U.S. history. Authorities have charged Cruz with 17 counts of premeditated murder. Speculation continues to stir on whether people in close proximity to Cruz, characterized as a “loner” and violent by former classmates, had missed signs of this potential behavior.

“I think we spoke with you in the past about a complaint that you made about someone making a comment on your YouTube channel,” Ryan Furr said in the message. “I just wanted to follow up with you on that and ask you a question with something that’s come up, if you wouldn’t mind giving me a ring.”

Hours later, Bennight said Mississippi agents visited him again, asking him against if he knew Cruz. He told them he didn’t, and they left. The YouTube account with the name “Nikolas Cruz” remained active until Wednesday evening, at which point it was deleted for “multiple or severe violations of YouTube’s policy on violence.” FBI did say if it confirmed the account belonged to Cruz himself.