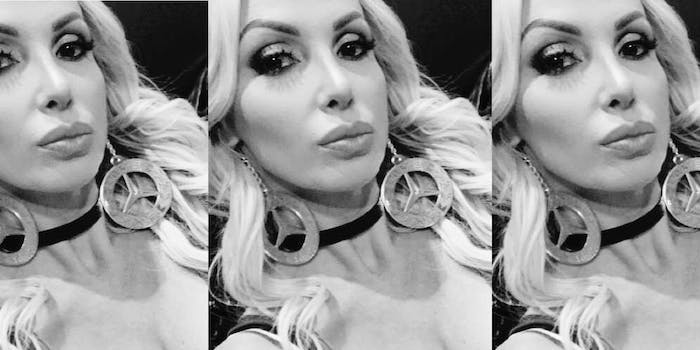 The abuse detailed in the lawsuit is graphic.

According to the Wrap, the suit, filed in Los Angeles Superior Court on Monday, alleges battery, assault, sexual battery, gender violence, among other offenses. The suit states that while Benz was only aware that the “shoot would be hardcore” and what she would be wearing prior to the filming, Tony T. repeatedly “slapped Benz’s face and breasts,” while telling her, “‘Open your eyes, bitch'” and “‘Open your fucking eyes.'”

“He would film with one hand and choke Benz with the other hand. Nomar stomped on Benz’s head. Between Tony T. and Nomar, Benz was hit, slapped choked and thrown on the ground and against the wall,” the suit reads. She was also gagged with her own underwear, according to the suit, and “effectively waterboarded.” The suit also says she never consented to having Tony T. touch her and tried to express that to him and Nomar by calling “cut” several times throughout the shoot.

According to the suit, Tony T. also made Benz rerecord her exit interview to say that she would work with him again after she initially said she would not, and threatened to withhold her check if she didn’t.

As a result, Benz’s suit says she suffers from “pain, suffering, emotional distress, as well as past and future medical expenses and lost wages.” She is seeking unspecified damages.

#NoMeansNo #CutMeansCut and me telling you I'm not ok with any of this should be taken seriously. I should not be beat down.

On set bullying, rape, & violence should never happen. #NoMeansNo on camera, off camera. Just NO!