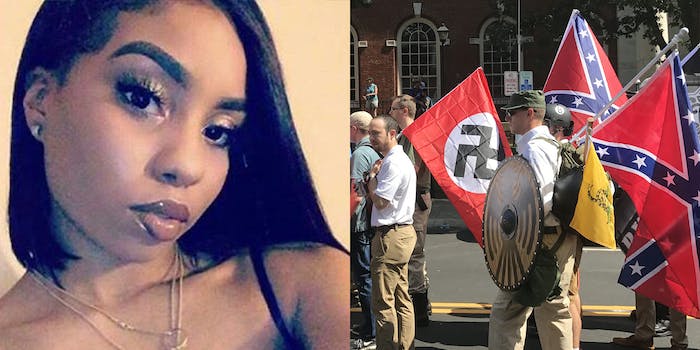 On July 22, two sisters were leaving a train at the Manchester BART station in Oakland, California, when a man came up and stabbed them both. One sister survived, and the other, Nia Wilson, passed away in a pool of her own blood. Wilson was 18 years old, a recent high school graduate, and Black. Her attacker was white. “It looks like it was an unprovoked, unwarranted, vicious attack,” BART Police Chief Carlos Rojas said at the time.

However, many community members have drawn connections between Wilson’s murder and the fact that the Proud Boys—who gained national recognition through their presence at 2017’s Unite the Right Rally in Charlottesville and are defined as a hate group by the Southern Poverty Law Center—were rumored to be planning a meet-up in Oakland for July 23, the day after she was killed. Wilson’s family has been adamant that the attack was racially motivated. “I hate to say that but, you know, why would you choose two young Black girls?” Ansar Muhammad, Wilson’s father, said. “That’s all I want to say.”

It’s no secret that neo-Nazis, white supremacists, white nationalists, and the branded “alt-right” have come out of the shadows since President Donald Trump’s election win. Trump’s base, at its most hardcore, are groups that celebrate “Western chauvinism” and men who codify racism and misogyny in the name of patriotism; the president has been dog-whistling to hate groups long before the campaign trail. But Wilson’s murder adds depth to an ever-present question in Trump’s America: Is white supremacist violence in the public square the new normal?

After Heather Heyer was killed in Charlottesville, President Donald Trump notably said that there were “very fine people” among groups like the Proud Boys that attracted white supremacists and anti-fascists. Alleged members of the Proud Boys showed up to disrupt a vigil for Wilson, and a fight ensued. In the span of time between Wilson’s death and the end of August, far-right demonstrations have been scheduled in Berkley, Portland, Washington, D.C., and Seattle.

Brendan O’Connor, a freelance writer who has been covering fascism in America for over two years, was present at the Portland rally last weekend that was organized by Patriot Prayer and the Proud Boys. “I absolutely believe these things are connected,” noted O’Connor when asked about the relationship between Trump’s rhetoric and the death of Nia Wilson at the hands of an alleged white nationalist member.

O’Connor’s social media coverage of that day details Proud Boys spraying counter-protestors with bear mace. Other accounts likened Portland to a “terrifying war zone” as local police shot at crowds with rubber bullets and flash grenades. Some counter-protestors sustained nearly fatal head injuries and gashes in their arms due to police tactics. The police chief of the Portland Police Department has since revealed that its department will stop using the flash grenades in order to “conduct some tests to make sure that they’re performing within the way that we expect them to.”

The certified hate group came to enact their hate—and the police appeared to have their backs.

Equally discomforting is what is planned for this weekend. Even though (or because) the Charlottesville rally was heralded as a national tragedy, white nationalists and neo-Nazis have decided to put on a sequel. “Unite the Right 2” is scheduled for Sunday and promises to be a “white civil rights rally” with police protection. While the city of Charlottesville denied the group a permit to hold their rally there, the National Park Service gave them a green light to hold it in D.C.

It’s unclear how many are expected to show up for Unite the Right 2. But to stand against it, Shut It Down D.C., a coalition of anti-fascist organizations, has planned a roster of counterprotests for Sunday, including a “Still Here, Still Strong” rally at noon, followed by a “Rise Up Fight Back” counterprotest at 2pm at Freedom Square. Bethany Dettwyler, who is involved with Shut It Down, says Wilson’s murder—like the murders of many, less-publicized Black women—is absolutely tied to the “rise of an explicitly white supremacist and fascist political movement.” But it’s not just the “alt-right” that has emerged (or rebranded) in the Trump era, she tells the Daily Dot, but that “older movements like Neo-Nazis and the Klan, are resurfacing too. Not only are some of these groups connected to or suspected of murder, like the extreme far-right group Atomwaffen, but the distinctly American problem of the school shooter is just a different form of someone like Dylan Roof or John Cowell, whose anti-Blackness and misogyny is much clearer.”

A number of Black Lives Matter activists who say they plan to counterprotest in D.C. worry that police will protect white supremacists, like previous demonstrations have shown. At the very least, D.C. law enforcement has said it plans to keep the “alt-right” and counter-protestors separate and has made firearms in and near the planned events illegal.

But ultimately, it will be, like it’s always been, left up to people most in danger to stop the violence and normalization of Nazis.

“I think a lot of people are finally learning that the oppressed can’t rely on the government or law enforcement to protect us,” Dettwyler said. “We have to be prepared to defend our own communities and keep them safe from fascists.”

Even if that means putting their own bodies on the line because the president won’t condemn “very fine,” violent people.