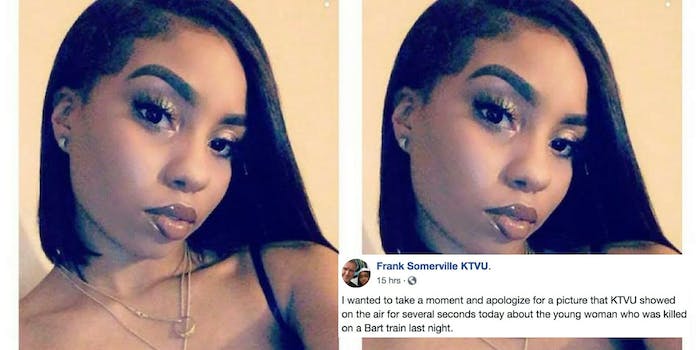 Why must murdered Black kids be depicted as 'thugs'?

Viewers of local Oakland news station KTVU are expressing outrage after the station used a photo of slain teen Nia Wilson holding what appears to be a gun during a broadcast about her murder.

On Sunday night, 18-year-old Wilson died after she and her sister, 26-year-old Lahtifa Wilson, were stabbed in the neck by 27-year-old suspect John Lee Cowell while they were attempting to get onto a BART train. Her sister was hospitalized overnight, and after a day-long manhunt, BART police arrested Cowell on Monday evening, according to SFGate. So far, the stabbings have been characterized as “random,” though police haven’t eliminated the idea that the crime was racially motivated.

Across social media, critics of the news station have shared snapshots of the broadcast’s use of the photo. It seems the photo is from Wilson’s Facebook page, where she has posted tens of other photos that news outlets could have used for stories regarding her death.

Fuck you @KTVU this is beyond unethical. A Black woman was brutally murdered by a white terrorist and this is the photo you decide to show? Y’all are disgusting. pic.twitter.com/MyQ7p2GVBw

Everyone please call @ktvu and demand that they issue an apology for this shameful coverage, two young black women victims of white terrorism and this is how they choose to depict them? Unacceptable, Call them now! (510) 874-0242 #NiaWilson #JusticeforNia #justiceforniawilson pic.twitter.com/gXUrNc8wXP

So @KTVU decided to put this picture up about Nia Wilson

We demand an apology ASAP pic.twitter.com/LpNIRimUh1

Someone needs to be fired at @KTVU for choosing a picture of Nia with a gun in her hand when dozens of innocent and beautiful pictures available. We have to stop criminalizing black victims in 2018!!!

Many have bashed the station for depicting Wilson, the victim of a murder, in a way that characterizes her as a troublemaker or a criminal, contributing to the narrative that Black people who are victims of violence are “deserving” of violence, or “contributing” to the violence against themselves.

“Why did they share that image? What were they trying to convey? And, as it turns out, she wasn’t holding a gun in that image, it was a cell phone case with a gun handle. It was a [sic] basically a gag—and the local news showed it like it said something about Nia’s character. She literally posted nearly 1,000 wonderful photos of her life on Instagram and Facebook, and they chose that one,” writer Shaun King, who has boosted Wilson’s story throughout the search for her murderer, wrote on Facebook. “Even in death, local news media finds a way to demean us. It’s why I believe so much in having our own outlets, our own platforms, our own morning shows, where we define our own stories and narratives without that type of ugliness.”

In previous high-profile murders of Black teenagers, such as Trayvon Martin and the fatal police shooting of Michael Brown, the media used photos that portrayed the teens negatively. Some 2012 stories of Martin showed photos of him wearing a hoodie, smoking, wearing a grill, or raising his middle fingers. In 2014, images of Brown showed him holding a peace sign, which some tried to characterize as a gang sign. After garnering criticism, publications later began showing a high school graduation photo of Brown in his cap, gown, and graduation stole.

At the time, critics used the hashtag #IfTheyGunnedMeDown to ask which photo the media would use if they were to be murdered, providing options such as graduation photos or employment headshots, and party photos. People using the hashtag made the point that regardless of how they seem in a “party photo,” they were still the same accomplished person depicted in the other pictures.

In response to KTVU’s use of the photo, the hashtag has also been revived.

Woooooow. And it's literally a phone case. #iftheygunnedmedown frfr. https://t.co/8zR3xg44bh

This is the literal reason that #IfTheyGunnedMeDown was created… as many pictures as there are of #NiaWilson that @KTVU would choose to use this photo of the VICTIM is not only irresponsible- it’s malicious, it’s cold- it’s what we’ve come to expect with black lives & media. https://t.co/OXGq2lAWM2

KTVU anchor Frank Somerville shared an apology to his Facebook page on Monday afternoon, about four hours after the broadcast, stating there was “no excuse” for the station to use that photo of Wilson, and that it was a “huge mistake” that the staff is “mortified by.” Somerville included three other photos of Wilson in his post.

“We NEVER should have used that picture. It was a huge mistake on our part. We realized it instantly. And that picture will NEVER appear on our air again. We had a lot of pictures to choose from and unfortunately that was one of the ones we used. Again there was no excuse for that. And my belief is that when you make a mistake you own up to it. And that was our mistake. A big mistake,” Somerville wrote. “Nia was a beautiful young girl. She had her whole life ahead of her. From me, and all of us at KTVU, I can’t say enough how sorry we are.”

(A KTVU newsroom staff member forwarded along the Daily Dot’s request for comment and referenced Somerville’s post for the time being. Somerville also addressed the photo on KTVU’s evening broadcast.)

Somerville’s post has been shared 2,500 times and has received nearly 5,000 reactions. Many readers rejected his apology, writing that the damage had already been done. Some asserted that the use of imagery depicting Black victims and victims of color is used far too often, showing that the use of Wilson’s photo wasn’t a mistake as much as it was a conscious, oft-made decision.

“This girl senselessly lost her life to a lunatic and you (the media), turned her into a suspect in her own death by using that picture….and took the focus off of the animal that actually did it. That’s what the media ALWAYS does to victims of color,” commenter Patricia Lyn Butler wrote.

“This happens all too frequently and it’s difficult to believe that no one in the newsroom took notice that this was not an appropriate photo for this story. If an error like this can be made, then there needs to be some significant and swift changes at KTVU,” another commenter, LaTanya McNeil-Jones, wrote.

KTVU also came under fire in 2013 when they ran fake, offensive names of pilots involved in the crash of Asiana Flight 214 at the San Francisco International Airport. At least three veteran producers were fired after alleging the pilots names were “Capt. Sum Ting Wong, Wi Tu Lo, Ho Lee Fuk, and Bang Ding Ow,” SFGate reported at the time.

The evening after her murder, Oakland residents hosted a “Say Her Name” vigil and march at the MacArthur BART Station in Wilson’s honor. Wilson’s family has also set up a GoFundMe page, which has received more than $23,000 in donations over the past day.