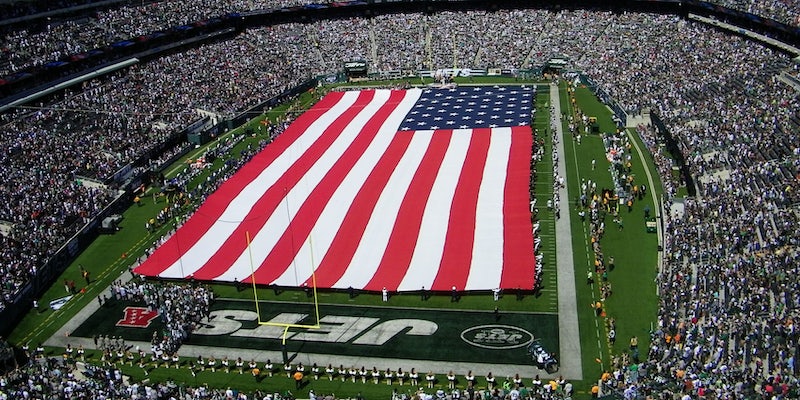 Some feel like the league is only doing it to hush protesters and cause internal strife.

As controversy continues in the NFL over players kneeling during the national anthem, it seems the league has come up with a solution: Donate millions to help Black Americans. But players are torn on the plans and some see the attempt as “hush money” to silence the protests.

NFL players and league officials came to a tentative deal Wednesday night that would provide up to $100 million to organizations such as the United Negro College Fund and Dream Corps, according to the New York Times. The donated funds, which will accumulate over the next seven years, come partly from owners contributing $5 million in 2018 to national projects, increasing to $12 million from 2021 to 2023. There’s also a plan to pay for local projects, with owners offering $250,000 annually to social justice causes and players matching up to $250,000 as well. Further money can be raised, too, and teams can donate funds through jersey auctions, telethons, and various other endeavors.

ESPN reports that $73 million for national funds have been “vetted and approved,” but owners will still vote on the plan’s local level funding in March. And not every player is onboard.

San Francisco 49ers strong safety Eric Reid and Miami Dolphins wide receiver Michael Thomas are upset after the Players Coalition, a social justice-aligned activist venture within the NFL, tentatively agreed to the deal. For them, the funds are an attempt to buy off protesters, encouraging players to stand up for the national anthem in exchange for donations. While there isn’t any explicit language in the deal that forces players to stop kneeling or sitting during the national anthem, “the NFL hopes this effort will effectively end the peaceful yet controversial movement,” according to ESPN.

“The Players Coalition was supposed to be formed as a group that represents NFL Athletes who have been silently protesting social injustices and racism,” Eric Reid wrote on Twitter. “However, [Coalition leaders Malcolm Jenkins and Anquan Boldin] can no longer speak on our behalf as we don’t believe the coalition’s beliefs are in our best interests as a whole.”

Other players have since spoken out as well. Los Angeles Chargers offensive tackle Russell Okung thinks the NFL is writing off the coalition by earmarking cash payments. Why fight racism when you can just throw money at organizations until protesters calm down?

“The NFL continues a disingenuous approach to player grievances, refusing to match the urgency of this moment,” Okung claimed, the Times reports. “Their proposal is woefully inadequate.”

The fact the Colin Kaepernick and Eric Reid are not involved in this deal says volumes.

Also the proposal looks a lot like hush money. $100 million between 32 BILLIONAIRE owners is jet fuel and escort money. https://t.co/1OpOP0oKIT

So the NFL tryna give a $100million donation for social justices. So they basically tryna write a check to stop the kneeling…. Bye. I hope the players don't fall for the bullshit. pic.twitter.com/WVwV61bgC8

Others think the deal is fundamentally in good faith, stressing that players can kneel or stand regardless of the league’s personal preferences.

To be clear, there is no quid pro quo between the NFL and the Players Coalition that players will cease protesting in exchange for financial support from the owners. The league understands that some players will continue to protest, but it is seeking to move forward anyway.

But most of all, fans are pointing out that Colin Kapernick isn’t even at the table. After all, he started the debate, and he’s still an unemployed free agent.

Without @Kaepernick7 at the table it shows they are trying to diminish the cause & "disappear" it. @MalcolmJenkins don't be a party to this feeble set-up. 5 owners+2officials, nope. @E_Reid35 gets it

NFL players can thank Colin Kaepernick for putting his career (and considering the hate coming from others….his life) on the line for this result.

In the meantime, President Donald Trump recently criticized kneeling NFL players again, and he even singled out Oakland Raiders running back Marshawn Lynch for sitting during the national anthem. It seems there’s still a long road ahead before the president—and the league itself—stops fanning the flames between the NFL and its players.