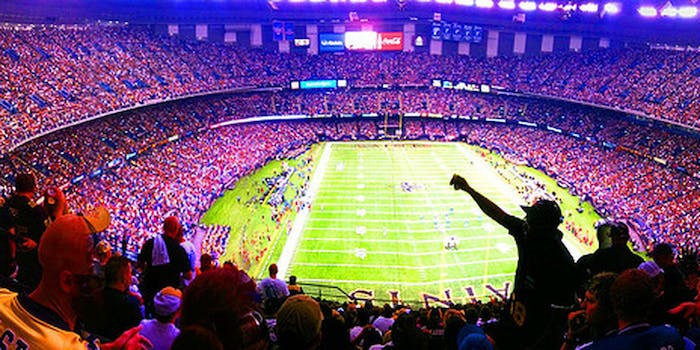 Facebook’s data science team looks at the highs and lows of NFL fandom. Can it predict the outcome of Sunday's game?

A close football game is a swooping, dramatic emotional tug-of-war for fans, as exhilaration gives way to anguish and despair snaps into jubilance, all with the toss of a football and the thud of body into body. Boisterous crowds can fall silent during a single play. Grown men cry. Children cry. Women cry. Tears are shed by all demographics. It’s intense.

Interested to see how social media captures the experience of sports fandom, Facebook’s intrepid Data Science team analyzed posts from users who wrote about football to chart the emotional highs and lows of this season’s NFL games.

The data scientists anonymously tagged millions of status updates that references specific games over the course of the season, and plotted these updates according to whether they featured positive or negative emotions. (They decided on the positive or negative attitude based on a list of preselected words. Daily Dot asked Facebook for a list of these words but have not received a response yet.)

Unsurprisingly, the data scientists found that the emotions of fans from opposing teams would dip as the teams lost and rise as the teams won. They created a graph of overall emotional responses to winning and losing during the season: 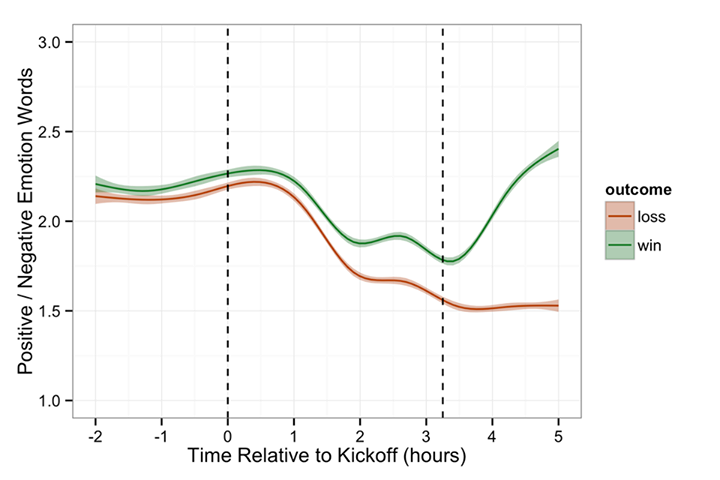 Facebook pointed out, however, that within specific games, things can become far more volatile, as teams tussle back and forth on the scoreboard. To illustrate how different games inspire turbulent emotional trajectories for fans, Facebook made charts showing the emotional reactions for fans in the two penultimate matchups before the Super Bowl, examining the Seattle Seahawks vs. the San Francisco 49ers, and the Denver Broncos vs. the New England Patriots: 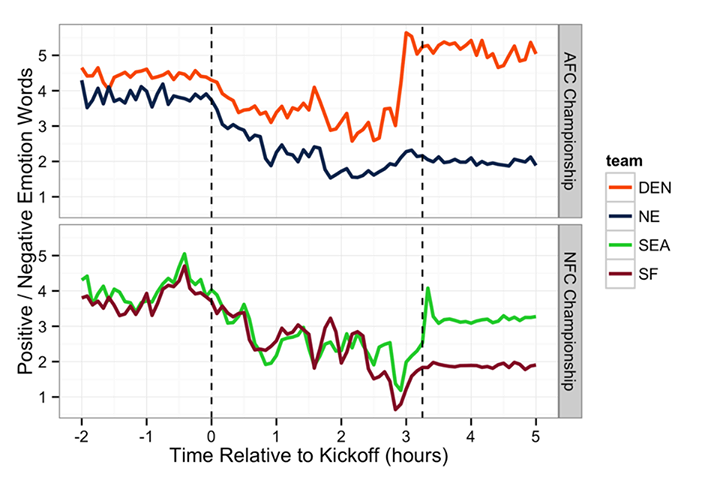 As you can see, in the AFC Championship game, the Broncos fans were happier than the Patriots fans pretty much from the get-go,while in the NFC, at one point the 49ers fans were more jazzed than the Seahawks loyalists (which makes all too much sense, because the Broncos controlled the entire game while the Seahawks struggled with the 49ers).

The Data Science team also looked at how fans fared emotionally over the course of the season, noting that important games have longer-term effects on how fans feel about their team.

The most interesting part of this study: the researchers explored whether fan sentiment could be a useful predictor of game outcomes. “In the playoffs so far, the team with the best pre-game sentiment (two hours before each game) has won nine out of 10 times,” Facebook data scientist Sean Taylor wrote. But don’t get too excited—the team also issued a caveat, noting that they performed a test that suggested this isn’t a good way to measure, so don’t start placing bets on the teams with the chirpiest social media fans.

Still, for what it’s worth, using Facebook emotions as a predictor, the Broncos are slated to win the Super Bowl.

Then again, a psychic monkey predicted a Seahawks victory, so at this point, it’s anybody’s game.