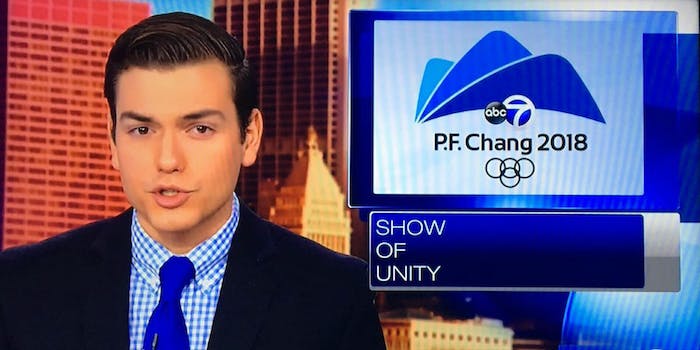 This was supposed to be a joke.

Broadcasting mistakes happen, as embarrassing as they can be. But one ABC affiliate station in Chicago is going viral for using a card during a Saturday morning news report that called the Pyeongchang 2018 Winter Olympics “P.F. Chang 2018.”

The blunder, which was first covered by the Chicago Tribune, reportedly happened after a graphic created for a “satirical piece” was used for a news story on the political ramifications of the Winter Olympics for Korea. The joke references P.F. Chang’s, an American-Chinese restaurant, and attempts to compare the restaurant to Pyeongchang in South Korea. But the Root proceeded to point out that using “P.F. Chang” as a satirical substitute for the word “Pyeongchang” is racist, even if the card’s appearance on Saturday morning was a total accident.

“The sort of earnest joke this mixup started is as stale, tired, and American as week-old fortune cookies (which no one in China actually eats)—reinforcing the notion that all things to do with Asian culture are replaceable, interchangeable and sound funny,” Anne Branigin wrote for the Root this morning.

Branigin went on to stress that sites like BuzzFeed put together Twitter reactions mainly featuring white Twitter users laughing about the mixup, ignoring the larger racial connotations behind the joke. So even if the broadcasting card was a mistake, it certainly wasn’t a funny one.

Note to graphics designer: If you are going to use a placeholder because you can’t figure out how to spell Pyeongchang, try not to use a racist slur. Oh, and P.F. Chang’s is Chinese not Korean. https://t.co/j7OGtRgZRO

Jokes about "#Olympic athletes" named "P.F. Chang" are not funny, they're racist.

Blocking someone for calling you out on your asshattery just makes you a mayonnaise dinglefuck.

The Chicago station’s Pyeongchang card comes after an Ohio high school wrote an apology over students who yelled “P.F. Chang’s” and “go back to China” at a multiracial away team member during a basketball game. As it turns out, jokes that reference the restaurant more often than not end with a racist (and hurtful) punchline.