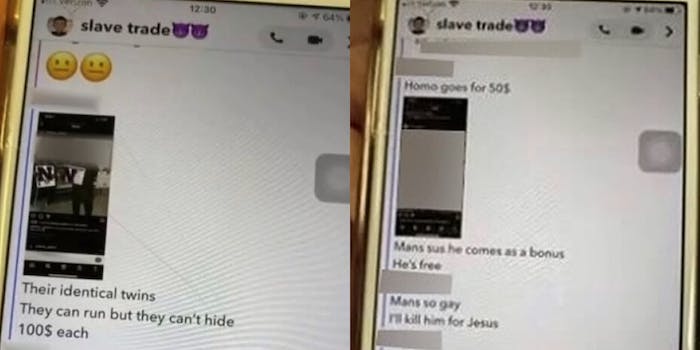 Screenshots of the chat are making the rounds.

The Newberg School District, near Portland, Oregon, is investigating a Snapchat group chat called “Slave Trade,” which included racial slurs, homophobic comments, and the hypothetical sale of Black students by a group. At least one person in the group is reportedly a student at Newberg High School.

Per KOIN‘s reporting on the incident, “a concerned student at Newberg High School recently shared screenshots” of the chat.

“They like picking cotton” and “all blacks should die let’s have another holocaust” are just a few of the remarks made in the chat, according to screenshots of the chat shared by reporter Ryan Clarke.

One person in the group can be seen trying to hypothetically purchase two students, with another saying, “I’ll take them for 150 as the pair.”

Newberg High School Principal Tami Erion reportedly sent a letter to members of the high school’s community, revealing that at least one student was involved in the group and announcing the investigation into it. In the letter, Erion reportedly described the incident as “serious and inappropriate”

According to the letter, the student “used photos of other Newberg High School students in the group. Attached to the photos were derogatory comments that included racial and homophobic slurs. … This chat originated in Michigan in late 2020, but our administrative team was just made aware of the group and our student’s participation late Friday.”

This incident comes after the Newberg school board reportedly banned from campus, in a controversial 4-3 vote, what the majority called “political symbols.” These “symbols” include Black Lives Matter signs and Pride flags.

Heidi Schneiter Pender, whose Black daughter attends the high school, wrote a passionate and viral Facebook post about the group chat on Sept. 13.

“I didn’t cry Friday night when I found out about there being a social media group chat titled “Slave Trade” involving students from my daughter’s high school. The Slave Trade involved highlighting black students in the school and then bidding on them as slaves according to how much value they bring as a slave. I didn’t cry when I saw the names and faces of black students I dearly love. I felt sick to my stomach, I prayed, I was mad. I talked to Katia about what was happening so she wouldn’t be blindsided when she went to school this morning,” Pender wrote.

“I know the students involved in the online slave trade do not represent all of Newberg students,” Pender continued. “But it makes me weep to ever think about someone putting a photo of my precious daughter up on something so abhorrent. It makes my heart break to see the faces of the young people who WERE put up in that group chat. And please do not ever tell me again that racism isn’t alive and well in our country.”

KGW News picked up the post and spoke with Pender directly about the incident. “For my daughter, who is Black, it’s confusing for her why people would be against saying her life matters,” Pender told the outlet. “It’s a straight line for her.”

This is not the first time a school has been embroiled in a hypothetical “slave trade” controversy. In Texas, high schoolers reportedly held a “slave auction” for their classmates of color via Snapchat. And in Michigan, students reportedly similarly participated in a mock slave auction of their peers.

The Daily Dot has reached out to Pender, Newburg High School, and the area school board for comment.