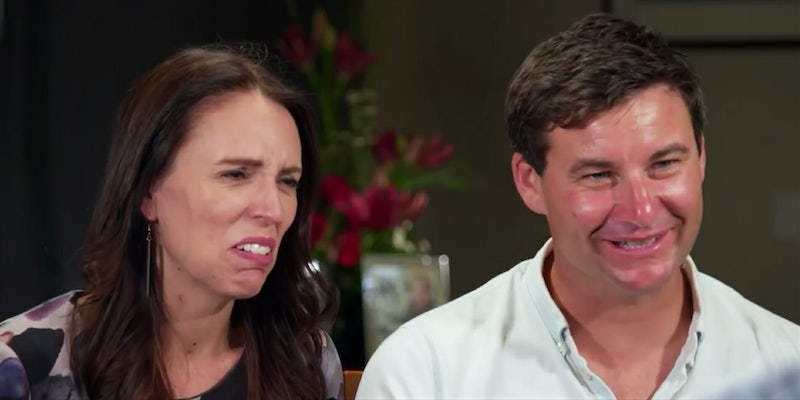 New Zealand Prime Minister Jacinda Ardern recently made headlines when she announced she’d be taking maternity leave upon giving birth to her first child. But in an interview for 60 Minutes Australia on Sunday, a reporter barraged her with intensely personal comments and questions that critics have deemed “relentlessly creepy” and “uncomfortable.”

The interview, according to the New York Times, shows Ardern repeatedly answering questions about her personal life that have little bearing on her administration’s policies. In one instance, reporter Charles Wooley tells Ardern he has never met a prime minister “so young,” “so smart,” and “so attractive.” In another segment, he asks about her baby’s due date, then proceeds to comment on when her child was conceived.

“It’s interesting how much people have been counting back to the conception, as it were,” Wooley tells Ardern and her husband Clarke Gayford, as both look visibly horrified by the question.

“I should add that the election was done,” Ardern eventually responds. “It was over. Not that we need to get into those details.”

One New Zealand columnist, Steve Braunias, equated the segment to a horror film, saying it “ought to come with a sickbag” for Wooley’s “creepiness” alone. Others on Twitter agree, arguing that the interview infantilizes Ardern and does not treat her with the respect she deserves as a prime minister.

“I only saw the shorts, but the tone of the reporter made me queasy even then,” New Zealand Herald columnist Lizzie Marvelly tweeted. “Australia needs to join us in the 21st century.”

I only saw the shorts, but the tone of the reporter made me queasy even then. Australia needs to join us in the 21st century. https://t.co/tvVk5gBsuj

2018: New Zealand’s prime minister happens to be a woman; an Australian TV journalist spent an extensive interview talking about nothing but her looks and pregnancy https://t.co/kqbZB0sS7i

This is cringeworthy.
Of course, such interviews are common with male politicians when their partners are expecting a child, so it's all fair.
Oh wait. Such weird ass crap has never been inflicted on a male politician.

"… 60 minutes reporters have always asked the tough questions…" yeah right, trying to figure out when our prime minister conceived her child and calling her pretty is totally hard hitting journalism… Charles Wooley, be a creeper on your own time. Jax got no time for that. https://t.co/kzbIvc4c6v

PM Jacinda Ardern should have walked from the so-called interview on 60mins. Not an interview. It was demeaning. PM give yourself permission to remove yourself from such abuse.

In this case, photos speak louder than words, as many grabbed snapshots of Ardern visibly cringing at the questions.

Says it all really… pic.twitter.com/0mgmuZmThp