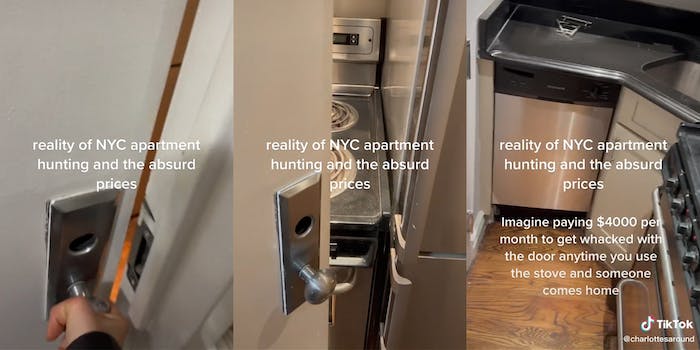 ‘Whacked with the door any time you use the stove’: TikToker shows what $4,000 will get renters in New York, sparking debate

'Imagine living in NYC on purpose.'

A TikToker’s video showing an absurdly small apartment kitchen with a door that collides with the stove when opened has garnered more than 2 million views on the platform.

The video is part of a series created by Charlotte (@charlottesaround), showing what $4,000 a month in rent can get someone in New York City.

“Reality of NYC apartment hunting and the absurd prices,” the text overlay on the video reads. “Imagine paying $4,000 per month to get whacked with the door anytime you use the stove and someone comes home.”

“How is this NOT a fire hazard???” Charlotte questioned in the video’s caption.

Viewers similarly questioned how safe the apartment is in the comments section. Others questioned the rental rate.

“Lmfao people will throw any number around,” another wrote. “I doubt it’s that much. And if it is, there’s thousands of other apartments in NYC for less that are way nicer.”

However, $4,265 is the average rent in Manhattan, according to RentCafe.

The video caused some to question why anyone would live in New York by choice.

“Imagine living in NYC on purpose,” another criticized.

Charlotte later clarified that the apartment is “not actually our apartment just one that we happened to tour” in a comment. In follow-up videos, the TikToker showcases a small one-room apartment that has a view of a brick wall and dumpsters outside the window.

The Daily Dot has reached out to @charlottesaround regarding her videos via Instagram direct message.