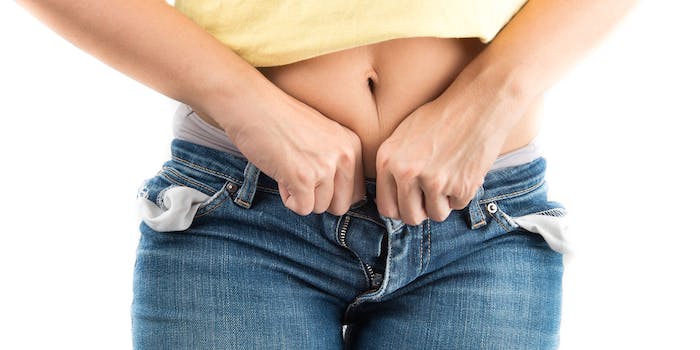 The fear that lurks behind those ‘new body’ resolutions

There other things you can do to take control.

It’s a new day in a new year, a day in which the media has pre-scheduled content so they can recover from their hangovers, so you’ve probably been inundated with “30 ways to better your body in 30 days” or “This is the latest no-carb challenge that’s totally different than the last no-carb challenge.” Here’s the thing, though: No matter what quick-fix diet or exercise plan you resolve to do, January 2017 is not the month where your body is suddenly going to morph into Adriana Lima’s, or whatever Victoria’s Secret model is big these days.

Whether you’re a woman or a man, I don’t have to preach to you the ways media and marketing sprinkle seeds of body-consciousness in your line of vision: the subway ad for teeth whitening, the 435-calorie-labeled brownie at Starbucks. The fact is you can always look better, be better, fuck better with better abs. Just ask 23-year-old Cara Delevigne who quit modeling because it made her feel old and hate her body. That is why it is important not to fall to these pressures because you need a New Year’s resolution or, really, a New Year’s distraction. Because just like it isn’t healthy to binge eat/drink/shop/drug to escape, it isn’t productive to hyper-focus on the one singular thing you think you can control because the year ahead looks mighty unwieldy.

When I was 23, back in what people called the aughts, I bought the Hollywood 48-Hour Miracle Diet. It was on-brand marketing to a desperate, lazy target: I was living in L.A. and wanted to be as skinny as all the model-actresses around me and I wanted to do it just like they did, by essentially not eating. So I diluted the $30, surprisingly delicious juice with water and drank it for two days straight, ingesting nothing else. By the time it was over, I lost 8 pounds. A miracle indeed.

Or at least it was the first thing that motivated me to jumpstart a seemingly healthier lifestyle. Unlike what most people say about fad diets having no lasting effect (which, sorry, is usually true), I was motivated to continue to lose the 20 pounds I’d put on post-college by joining a gym for the first time and rethinking every 2am run to Taco Bell. I was close to my “ideal” body weight by the time the following New Year’s came around.

However, my body was all I thought about. Other things I could have pondered but avoided: how miserable I was waiting tables and not writing, the not-so-good men I was hanging around, my very ill mother who was about to die. Taking control of my career seemed too daunting. Hanging around better men was impractical for a woman who did not want to emotionally open up. Because the last thing I felt equipped to do was deal with the loss of the person I loved with the greatest intensity. So I took control of the one thing I thought I had control over: my body.

Many would see this as a good thing. We feminists fight for the right over our own bodies all damn day. But this wasn’t a fight to keep bad messages and worse men out. Quite the opposite. My body was actually screaming for a different kind of attention and I numbed it any which way I could: with alcohol, food, no food, those men. Nothing was in balance. Slenderizing wasn’t the work that I needed to get done.

I think about this misplaced control as the resolutions pour in and we head into the horrifying territory of 2017. We all couldn’t wait for 2016 to be over, but 2017, let’s be honest, seems a lot scarier for a lot more people than Bowie or Carrie Fisher fans. Just because we may feel powerless over the laws and policies President-elect Donald Trump and his cabinet of anti-women, anti-people of color, anti-LGBTQ curiosities will likely bring, it doesn’t mean we have to bury ourselves into our bodies and pick at the “flaws” that are easier to focus on. It means we have to face the demons that are damaging us and the people around us the hardest and the fastest.

Resolve to do the work that combats fear, even just a little. Give to your local LGBTQ center or Planned Parenthood. March in a local protest or a national one. Order a Safety Pin Box and act on your words to be an ally. Speak out and do something when you see a woman in a hijab or a black man in a hoodie get harassed for no real reason. Get angry and sad and determined in a way that matters not just to you, but to others who might not be so lucky to have the luxury of a “miracle” diet. Resolve not to hide into the anxieties of your easily distracted mind. Because the demons will await you anyway.