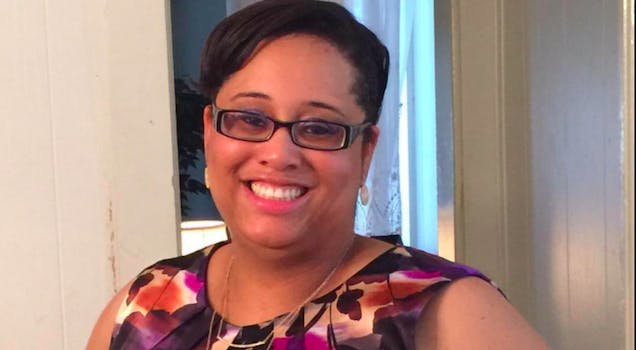 Photo via Ashley Bennett/Bennett for Freeholder

Republican incumbent John Carman faced off against Democrat Ashley Bennett in Atlantic County, New Jersey’s race to serve as a Chosen Freeholder (Freeholders are the state’s equivalent of county government officials). Carman lost his reelection bid Tuesday night, even though Bennett was running her first campaign for office. And as it turns out, Bennett decided to run after she saw Carman post a misogynistic meme making fun of January’s Women’s March.

During the Women’s March, Carman turned to Facebook and posted an image with a woman in the kitchen, reading “Will the women’s protest be over in time for them to cook dinner?” Bennett saw the meme and, angered by the post, decided to run against Carman.

“People want change,” Bennett said, according to Philly.com. “I am beyond speechless and incredibly grateful to serve my community. I never imaged I would run for office.”

This N.J. politician, John Carman, had posted this on Facebook during the Women's March. pic.twitter.com/fNKnhlfrHG

Carman was no stranger to controversy while serving as a freeholder, either. Previously, he was caught wearing a patch that depicted South Jersey with a Confederate flag. Bennett criticized Carman for doing so, as the Confederate flag is steeped in deeply racist roots.

“As a woman of color, I had a deep, visceral reaction to the images I saw,” Bennett said to NJ.com.

Of course, Carman quickly went viral for serving some karmic justice to one of her county’s most vocal bigots.

Ashley Bennett, who showed up at an Atlantic County Freeholder’s meeting to protest comments made by Freeholder John Carman mocking the Women’s March, and then decided to run for his seat, knocked Carman off the board on Tuesday. Congrats Ashley!https://t.co/LmlnCfKP7f

John Carman mocked the Women’s March by saying “Will the women’s march end in time for them to cook dinner?”

Ashley Bennett responded by running against him and winning.

This is what taking charge of our own government looks like. pic.twitter.com/EGF8FO1VG2

This is the most brutal self-own. This Carman guy posted mocking women going to the Women’s March, and one got so mad she ran against him – and won!https://t.co/8LBsRvYpEJ

This isn’t the first time racism has reared its ugly head in New Jersey. During Edison’s school board elections, a racist flyer went out targeting two people of color running for the town’s school board. White supremacists have focused on universities across the state for recruitment as well, sparking backlash among local anti-fascism activists. While the Garden State still has a lot of work to do towards racial equality, Bennett’s victory is one small step forward in the larger fight.