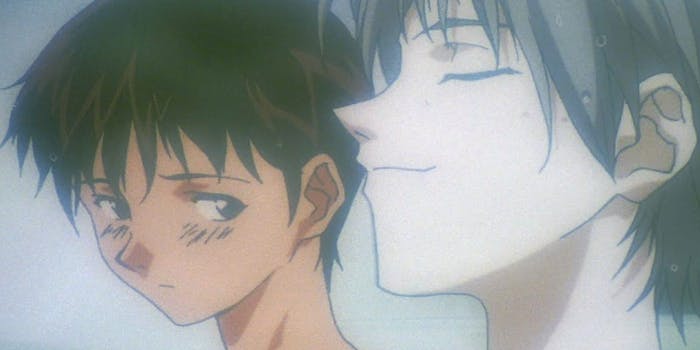 Why did Netflix erase the queerness of ‘Evangelion’?

Is it just awkward translation, or did Netflix erase Shinji’s bisexuality?

When the seminal mid-’90s anime Neon Genesis Evangelion dropped on Netflix last week, some of the changes to the new translation left longtime fans of the show accusing the show’s translator of diminishing the significance of the queer relationship depicted in the show. Now, after revelations about the translator’s past work—including opposition to a ban on fictional child pornography—fans are further calling his intentions into question.

When it was announced in late November of 2018 that Evangelion was coming to Netflix, many people were excited to finally have the classic show accessible again. Both a deconstruction of the popular mecha genre and an intense psychological drama, Evangelion’s influence on culture is hard to overstate. In spite of this, it hasn’t been distributed in English since 2011. Excitement became more cautious as talk began circulating of a new dub that explicitly avoided including any of the original voice actors.

They let us audition- AFTER we found out auditions were being held and raised a fuss. But I wouldn’t be surprised if they threw out the files as soon as we left the studio. They never had any intention of involving us.

Evangelion became available on Netflix on June 21, with some longtime fans skeptical of how the new dub would live up to the original. Some worries were assuaged: The show still had the iconic original theme, and Casey Mongillo did an excellent job voicing the main character, Shinji Ikari.

But the iconic ending credits song, a cover of “Fly Me to the Moon,” was gone. While its absence was felt at the end of the very first episode, there was a different change, near the end of the series, that angered queer fans specifically. The entire show was retranslated for Netflix’s new dub, and while some argued the translation is aptly more literal, others said the emotional weight of certain lines was lost.

sorry but this is not ok (right is from the new netflix eva script) pic.twitter.com/LehJYFjMng

Dan Kanemitsu, who’s credited with the translation for Netflix’s version of Evangelion, tweeted he tried his best to be “faithful to the original source material” but also said that “leaving room for interpretation [makes] things exciting.” For example, there is an argument to be made that the Japanese word “suki” can be literally translated as “like,” although it doesn’t accurately reflect the depth of feeling implied by that word.

His defense of a more “literal” translation is under further scrutiny by people who noticed that every instance of “terrorist” was replaced with “leftist” or “left-wing terrorist.”

Adding to growing suspicions about his political leanings, Twitter user @avatarskorra_ on Wednesday pointed out that Kanemitsu is one of the creators behind a self-published manga and accused him of depicting sexualized young females wearing the iron cross, a symbol associated with Nazism. Kanemitsu confirmed to the Daily Dot that he is the creator of an unofficial spinoff of the manga and anime series Strike Witches.

“Strike Witches is a complete fictional world where nations all unit to fight an alien threat,” Kanemitsu said. He added the character in the illustration shared to Twitter is wearing the Knight’s Cross, a German military symbol, and that “there are no Nazis in the world of Strike Witches.”

@avatarskorra_’s tweets also pointed to Kanemitsu’s essay in opposition to a 2011 policy implemented in Tokyo that expanded bans on child pornography to include fictionalized works, as well as a campaign to ban fictional graphic depictions of anyone under the age of 18 engaged in sex acts. In the essay, Kanemitsu writes that “widening the definition of child pornography to include fictional material belittles the gravity of real sex abuse.” He told the Daily Dot that he advocates for “safeguarding the ability to [discuss] sexuality in fiction helps protect and encourage diversity in fiction.”

Notably, the very relationship in Evangelion that audiences have interpreted as queer is between underage characters. In episode 24, Shinji Ikari, the anxious 14-year-old pilot antagonist, meets Kaworu Nagisa, the mysterious new Eva pilot whose forward nature frequently makes Shinji blush. He’s only there for one episode, but he makes an enormous mark on Shinji’s psyche. After they take a shower together, Kaworu says in the original English subtitles, “You have my regard.” When Shinji is confused, he clarifies by saying “It means I love you.” In Netflix’s version, he instead says “You’re worthy of my grace” and “I’m saying I like you.”

As people watched the new dub and discovered changes to the queer context, many longtime fans grew upset. Some turned their anger over what they felt was queer erasure into art, celebrating the relationship or making fun of the trope of poorly veiled queerness.

Got to love that Netflix adaptation #evangelion pic.twitter.com/nDJqUAHUFs

There are other changed lines in Evangelion that seem to obscure the queerness of the relationship. The line in Netflix’s version written as “[Human’s] hearts are delicate like glass. Especially yours,” is strikingly different from the romantic original line: “You’re so delicate, like glass, especially your heart.” When speaking about the problem of human loneliness, Kaworu says in the new translation, “But people can live on by being able to forget,” then places his hand on Shinji’s causing him to gasp and blush. In the original, he says, “Humans are able to go on with their lives because they’re able to forget it every so often.”

While the lines are similar, one implies that humans do something every so often in order to forget, and the hand touch takes that implication further, to something intimate. The old lines have an undercurrent of queer attraction and intimacy, but the new ones skew more toward rumination on the human condition without romantic subtext.

Even a funny exchange in which Shinji says, “We better get to bed,” and Kaworu replies, “Together?” is muddled. Instead, Kaworu oddly responds, “With you?” The meaning is still there, but it demonstrates a major problem with this translation: Just because words mean the same thing doesn’t mean they have the same connotation or emotional weight, and it doesn’t mean they sound natural.

Reiterating his tweets, Kanemitsu told the Daily Dot that he could not specifically comment on his work for Evangelion, only the nature of translations in general. We’ve reached out to Netflix.

“There are cases where you want to make a work especially accessible to a specific target audience by removing or replacing culturally specific concepts inherent in the original work, and instead employ expressions and concepts that the target audience is familiar with, even while these may not be close match to the concepts and nuances of the original source material,” he said.

But unlike the removal of “Fly Me to the Moon,” the changes to the translations have broader implications for the overall meaning of Evangelion. Much of the show is focused on exploring Shinji’s self-image, his relationships to others, and his confused pubescent sexuality. In the original English subtitles, Shinji says of that intimate moment with Kaworu, “It was the first time someone told me they loved me.” The significance of someone not being told that until they are 14 years old cannot be overstated, especially one who has gone through as much abandonment and trauma as Shinji has. While it’s important to feel liked, saying that “it was the first time someone told me they liked me” does not mean the same thing. An essential part of Shinji’s journey to recognizing his capacity for self-love is realizing that he can be loved at all. Hiding that queer love away changes the story, and while that story is still good, it is weaker for obscuring this essential part of Shinji’s growth.