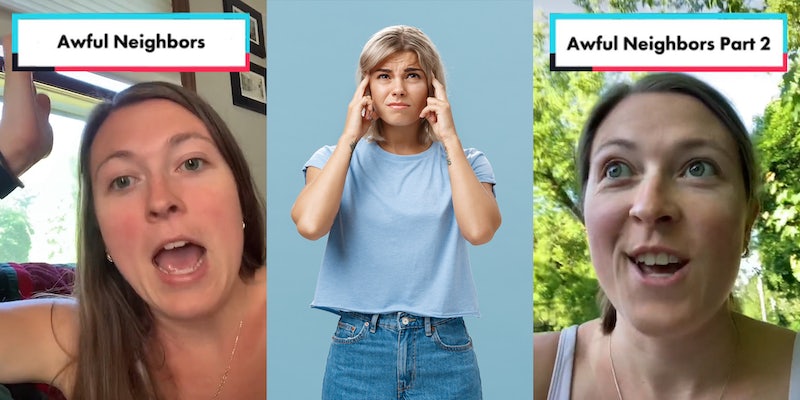 A TikToker who spent Memorial Day housesitting detailed her journey with neighbors who she originally thought were just obnoxiously blasting music—and how things played out.

Syd (@poorandhungry) initially told viewers that she was frustrated after sitting outside at her housesitting spot in a suburban neighborhood, quietly listening to music and reading a book, only to have what she believed to be the next door neighbors start blasting music loudly in retaliation.

“They’re listening to some like, live performance for Memorial Day weekend,” she theorizes after she goes back in the house. “I don’t know if it’s in town or somewhere else, but they’re listening to a live broadcast of a performance and the performers are horrible… So for the past two and a half hours, it’s just been really off-key people singing patriotic songs at full blast.”

Some time passed after Syd uploaded her first video and the music continued, so she decided to do some investigating. As it turns out, the next-door neighbors weren’t the culprits at all—and the music wasn’t a broadcast.

People several streets over were actually holding a live concert in their backyard, she says, walking down the street and letting viewers hear the music in question. She also claimed the music was so loud that the windows back at the house where she was staying were literally shaking.

“Don’t get me wrong—would be dope if they weren’t in like a thickly settled neighborhood,” she continues. “What the hell?”

Although Syd expresses some concerns about being a “Karen” for complaining about the situation, most viewers understood her frustrations.

“You’re allowed to be annoyed — even allowed to vent on TikTok,” @chellebeans287 wrote. “It’s your actions if you take any against the neighbors that make you a Karen or not.”

“Never make a noise complaint. Ask for a wellness check, bc ‘something’s wrong,’” @oldbalddad suggested. “Nice respectful neighbors don’t do this, so they must need help.”

Syd ultimately posted a final update saying that she gave up and went to the movies a couple hours later, and when she returned around midnight, the music finally stopped.

“The music was so horrible and so loud that it drove everyone inside, and I saw all the people in the neighborhood were just in their cars leaving because it was awful,” she recalls. “Would not be surprised if somebody called the cops.”

The Daily Dot has reached out to Syd via Instagram direct message.