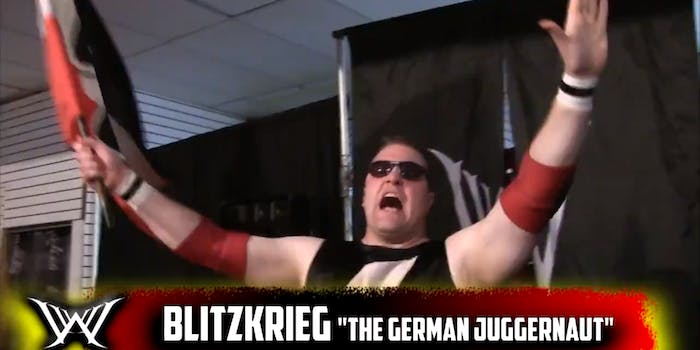 Teacher under investigation after being outed as Nazi-themed wrestler

Some of his students had even seen him wrestle.

A school teacher by day and a Nazi-themed wrestler by night, Kevin Bean’s life sounds like a dark Netflix show.

Described as a “good guy” who was “very religious,” Bean had spent the last 14 years teaching fifth and sixth grade at a local school in Boyertown, Pennsylvania, Vice reports.

Bean’s small community was sent into shock after it found out that his extracurricular activities involved dressing up as “Blitzkrieg the German Juggernaut,” an amateur wrestler whose act included waving a flag with the German Iron Cross and throwing Nazi salutes at the audience.

Bean’s alter-ego was supposedly a “heel,” a gimmicky character meant to act as the villain in professional wrestling. But just like Archie Bunker, his vitriolic persona ended up attracting a dedicated fan base.

His supporters had been known to show up to matches flashing Nazi salutes and signs that said “Blitzkrieg Herrscher Aller MENSCHEN” (“Blitzkrieg ruler of all people”). Dino Sanna, owner of the World Wide Wrestling Alliance, told the Blast that some of Bean’s students had even attended.

David Goodin, Spring-Ford’s superintendent, published a letter on the school district’s website Monday saying that administrators would be conducting an investigation into Bean’s wrestling activities. He added that the video did not “represent the core values of the school district.”