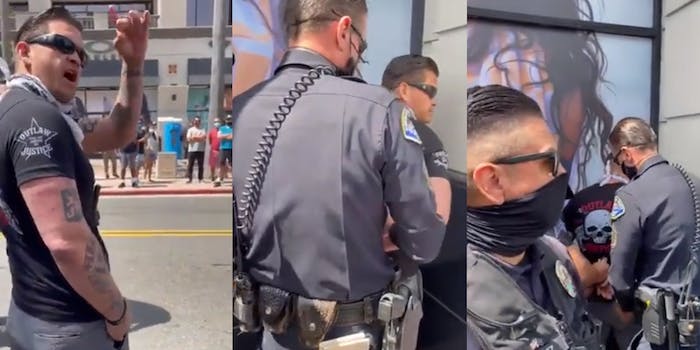 Police arrested an unnamed man with a swastika tattoo who assaulted an Asian man during a so-called “White Lives Matter” rally in Huntington Beach Pier in California.

The “White Lives Matter” event on Sunday promised to be a grand showing of protest against anti-white bias and multiculturalism. Most of the “White Lives Matter” rallies have been poorly attended failures. Indeed at this event, Black Lives Matter and other counter-protesters outnumbered the white nationalists. Confrontations and fights broke out in the course.

One of the altercations involved an Asian man trying to speak to an agitated White Lives Matter protester with a swastika tattoo. In a Reddit video, he asks the Nazi that he wants to know, “Why you believe those beliefs?”

He continues to step in front of him. The slight contact sets off the Nazi. He pushes the Asian man away.

The Asian man continued: “I want to know why you hate me so much.” The Nazi shoves him again, then strikes him the face, knocking off his hat and glasses.

The undeterred Asian man continues to question the origins of the Nazi’s hate, a conversation the latter refuses to engage in. Even with the Nazi getting arrested by Huntington Beach’s finest, the Asian man tells the police he doesn’t want him arrested: “I want him to talk to me.”