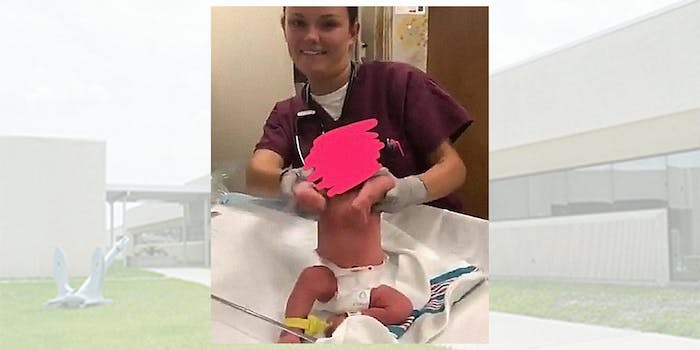 Navy nurses in hot water for flipping off newborn, forcing baby to dance to rap

No one wants to see the baby 'in da club.'

Two nurses in a Florida naval hospital are facing disciplinary action after flipping off newborn babies and making one dance to 50 Cent on Snapchat.

Corpsman Allyson Thompson captioned the photo of her giving the baby the bird, “How I currently feel about these mini Satans.” She also worked together with fellow Naval Hospital Jacksonville nurse Joanie Barrett to record a video of herself forcing a newborn to dance to “In Da Club,” holding the baby up by the arms.

“We’re going to hell,” one person, presumably Barrett, jokes behind the camera in the Snapchat video.

Both Snaps later went viral on the internet, thanks in part to a Facebook post originally created by one of Thompson’s high school classmates condemning the nurses’ actions. Shortly after, the hospital pulled both nurses and publicly commented on the situation on Facebook.

“We are aware of a video/photo posted online,” the hospital’s commanding officer said over Facebook. “It’s outrageous, unacceptable, incredibly unprofessional, and cannot be tolerated. We have identified the staff members involved. They have been removed from patient care and they will be handled by the legal system and military justice.”

Ironically, the Jacksonville hospital boasts being “Baby Friendly certified,” meaning hospital nurses should be properly trained in proving maternal care and care to their babies. The internet has since harshly condemned the two staff members, with many calling their behavior disrespectful and cruel.

OMG, How Sick is That. They should be sacked never Work Again. i also hope they get Punished, The Damage they could do.

Hopefully they get jail time.

They need to have courts-martial bearings and be booted out of the military.