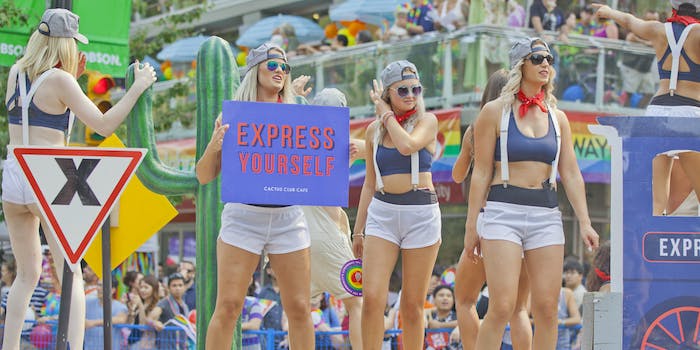 National Coming Out Day isn’t just about coming out

If you're not ready, it's OK to stay in the closet.

Today’s National Coming Out Day, one of the most visible LGBTQ holidays in the United States. It’s a time to be out and proud about being queer, and everyone has an obligation to join in, right? Isn’t that the whole point?

National Coming Out Day happens every Oct. 11, commemorating the Second National March on Washington for Lesbian and Gay Rights that happened on the same day in 1987. For many LGBTQ Americans, Coming Out Day is about honoring their journey leaving the closet, celebrating their lives as out queer folks, and supporting lesbian, gay, bisexual, trans, and queer kids who are still taking their first steps forward.

But National Coming Out Day isn’t just about that—it’s also dedicated to the LGBTQ folks who cannot come out yet. And in 2017, that’s a big deal. America isn’t very kind to the community right now, especially trans and queer women.

Amid President Donald Trump’s presidential campaign and subsequent election, hate crimes targeting queer Americans have plagued our national news cycle. Not unlike last year and the year before, hardly a month goes by before another trans woman of color is killed and deadnamed by the media. For some queer folks, especially those living in conservative, rural, or suburban areas, coming out just isn’t possible. The closet becomes a safety device, allowing queer or trans people to avoid harassment, violence, or death.

So today, National Coming Out Day isn’t just about those of us who are out, proud, and loud. It’s also dedicated to the quiet ones, the silent ones, as well as the young kids who have to keep themselves hidden away until they can finally leave the closet in a more accepting community. Everyone deserves to come out at their own pace, especially if their safety is on the line.

Twitter is filled with LGBTQ activists making this point, arguing that today is just as much about people coming out as it is about queer folks who have yet to.

It's National Coming Out Day. Good luck especially to my trans bb's who are coning out today. And love to those who aren't ready. <3

It’s National Coming Out Day, ❤️ to all, esp. if you’re in a situation where you cannot safely come out. I love you. And I’m proud of you.❤️

So here's your reminder:

You don't have to feel bad about not coming out.

Your journey and its timing is entirely up to you.

Many point to the trans community in particular. Trans women and non-binary femmes face backlash when they leave the closet, and its toll can be traumatic if their family isn’t accepting. So for them, coming out isn’t so much a joyous occasion as it is a stressful one.

And everyone universally agrees on this: National Coming Out Day isn’t about coming out as an ally. It’s about being queer. Allies, it’s time to step back today, please.

#NationalComingOutDayhttps://t.co/asXHGKG2zP oh dear, A is NOT for Ally. do better HRC

And when in doubt, good allies help the LGBTQ community by buying us pizza.