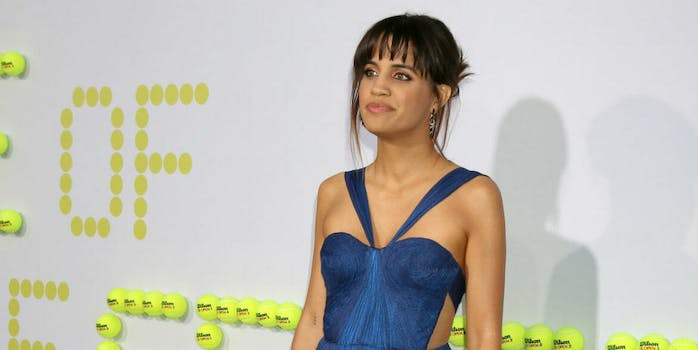 A nonconsensual photograph is not an 'error.'

When a photographer took an upskirt photo of Natalie Morales at the premiere of her latest film, Battle of the Sexes, earlier this month, the press labeled it as a “wardrobe malfunction.” And now the actress is firing back about both offenses.

In a series of tweets on Monday, Morales called out the photographer saying, she was trying to get that “Angie look,” referring to Angelina Jolie’s famous high-slit 2013 Oscar dress, but that it was not an invitation to look at her “bits.”

“Also, JOKES ON YOU, I was wearing skin-colored underwear so you can’t actually see my bits. But if you could? I wouldn’t be embarrassed. But YOU should be. What a disgusting, horrifying job you have.”

.. which was one of the happiest moments of my life thus far. These are pictures they PURPOSELY took up my skirt TO GET A SHOT of my vag 2/

So you're gonna come to an event that I've waited my whole life for, that I'm super proud of, to try and exploit my body? For your gain? 4/

Not that it would be ok at any time, but you know, this specifically, is a red carpet, so I'm there for you. There's a silent contract..5/

I'm there to promote my movie, you're there to take pics you can sell. Pics I'm POSING for, that I've agreed to. 6/

Pictures of my face and body, covered in whatever way I see fit. I didn't pose for you to angle your camera up my skirt. And yeah, 7/

It's a high-ass slit because I like the way my leg looked & I wanted to get me some of that Angie look, but I wasn't showing you my bits 8/

Also, JOKES ON YOU, I was wearing skin colored underwear so you can't actually see my bits. But if you could? I wouldn't be embarrased 9/

But YOU should be. What a disgusting, horrifying job you have. 10/10

On Tuesday, she clapped back again on Twitter, this time at the media’s labeling of the incident as a “wardrobe malfunction” and how she should not be shamed for having a body or being a woman or celebrity.

“This is a problem with how we tear down women and reduce them to a sum of body parts, to be at once sexualized and shamed,” Morales wrote.

Before this gets watered down or the word "vagina" gets censored out, here's my statement on this "wardrobe malfunction" b.s. pic.twitter.com/nE6CNAsovB

Upskirt shots of female celebrities have long been used as a tool of shame, with the paparazzi hoping to catch women in a moment no one was intended to see, but one that’s worth a lot of money if captured on camera. Then it is women who are often held accountable when their bodies are exposed without their consent, while publications and photographers take none or little of the blame.

So when the press labels the photographer’s violation as a “wardrobe malfunction,” they put the onus on Morales and ignore the fact that she was exploited by a man who purposely aimed to obtain a scandalous photo of her that he could then shop around or use as leverage to prevent it from circulating.

In 2016, Emma Watson recounted an experience during a speech for HeForShe, of which she is an ambassador, of how photographers literally laid on the ground to snap shots up her skirt during her 18th birthday bash. The photos were published in English newspapers the next day—because such shots were coveted and supposedly “legal” because she had turned 18.

In 2012, Anne Hathaway eloquently summed up what is wrong with this during an appearance on the Today show after upskirt photos of her were shared online:

“It was obviously an unfortunate incident. It kind of made me sad on two accounts. One was that I was very sad that we live in an age when someone takes a picture of another person in a vulnerable moment, and rather than delete it, and do the decent thing, sells it. And I’m sorry that we live in a culture that commodifies the sexuality of unwilling participants.”