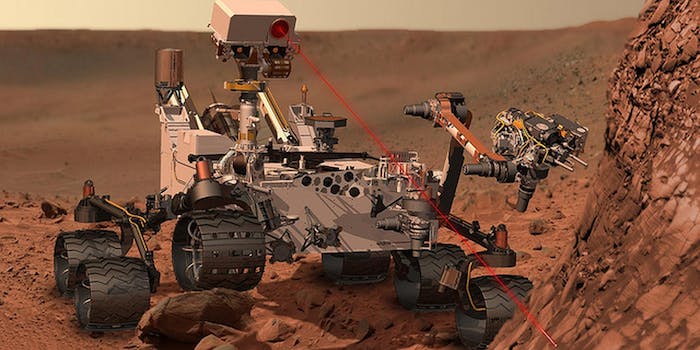 NASA discovers something historic on Mars—but what?

What amazing, earth-shattering, historic discovery did NASA make on the surface of Mars last week? That’s not a rhetorical question. We really want to know what’s up, but NASA isn’t telling anybody yet.

All we know so far is that the Curiosity rover discovered … something, via chemical analysis of a soil sample. And, as a NASA spokesman said to NPR, “This data is gonna be one for the history books. It’s looking really good.”

Scientists are skeptics by nature, so it’s no surprise NASA wants to wait a few weeks before officially announcing the discovery; they must first run repeated tests to ensure whatever they’ve found is genuine, rather than a glitch in their equipment, a mathematical error, or any of the thousand other ways researchers might initially reach a wrong conclusion.

Still, whatever they think they’ve found looks good enough for NASA professionals to drop on-the-record hints about it to NPR. While the world waits for official confirmation, Twitter’s collective imagination ran wild.