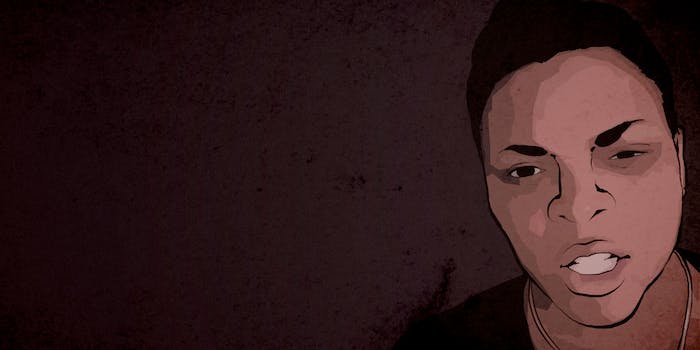 'If you are an officer...[and] you're afraid of people who don't look like you, you have no business in that uniform.'

The video, which showed two officers wrestle the 37-year-old African-American man to the ground and then shoot him at point-blank range, triggered spasms of anger across the internet. However, for Jones, the horrifying incident hit a little close to home.

On Wednesday, a seven-minute video of Jones talking directly to the camera went viral on Facebook Live—racking up over 3 million views. As an African-American female police officer who has served the Cleveland area for two decades, Jones had an impassioned message for police officers who harbor racial animus again minorities: “Take the uniform off.”

Jones said she watched the 39-second video (warning: graphic content) of Sterling being killed over and over and again, thinking about how it created tension between the police officers she knows—people who put their lives on the line every day to serve their communities—and the violence the officers in the video perpetrated on a man who looks like her sons.

“The reason why I became a police officer is to make a difference in people’s lives,” she said. “I knew what it was like to have a parent on drugs. I knew what it was like to watch people be picked on and bullied on and all kind of things. I said, ‘I want to make a difference. I want to be that change.’ So I became that change.”

Jones says it pains her on a daily basis to see violence being committed by members of the predominantly African-American community she serves, but seeing that same type of senseless violence being carried out by police officers is far worse.

“If you are white and you work in a black community and you are racist, you need to be ashamed of yourself,” she said. “You stood up there and took an oath. If this is not where you want to work at, then you need to take your behind somewhere else.”

Jones said, after seeing the video, she considered quitting the force, but decided that being a positive role model serving the community is more important than ever. She urged people to speak up when they see cops behaving badly, complain to law enforcement and civilian officials—basically anyone who will listen.

I'm sure #OfficerNakiaJones isn't the only Officer or Person that feels this way!I DO TOO

Nakia Jones makes me proud to be from Cleveland. #OfficerNakiaJones

Nakia Jones is an officer in the Cleveland neighborhood next to where I grew up. More cops need to be this pissed. https://t.co/X2OdcRLuWT

Heroine = #OfficerNakiaJones. Support her and others like her. Lets revolutionize the LEO community from the inside. https://t.co/GvmUXefhop

Nakia Jones has just been added to my list of heroes. She should be a national hero. The example given… #NakiaJones #GoodCop

Internet outrage over the Sterling shooting has already made some important people pay attention. Louisiana Gov. John Bel Edwards said on Wednesday the U.S. Department of Justice’s Civil Rights Division will be looking into Sterling’s death. 2016 Democratic presumptive presidential nominee Hillary Clinton also said in a statement, “Something is profoundly wrong when so many Americans hase reason to believe that our country doesn’t consider them as precious as others because of the color of their skin.”