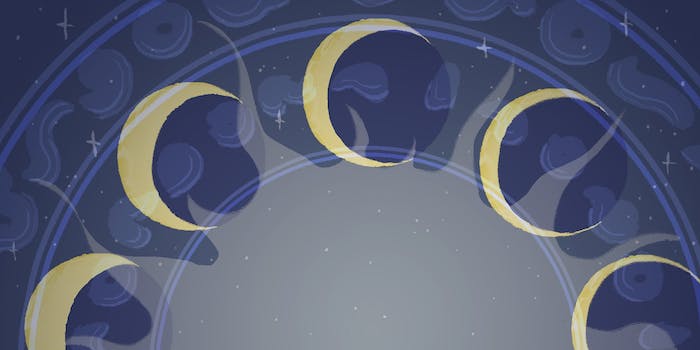 I learned about witchcraft in a Google Hangout

How do witches learn online? I decided to take some classes.

It starts with the chime of someone entering a Google Hangout.

I am laying on my couch with the lights dim and a candle lit, ready to listen to my first night of Mystic School, and this is not the sound I expected to hear. Though in hindsight, why didn’t I?

Mystic School is separated into six, one-hour long sessions, originally held live and now available for purchase and download. The classes are led by Sarah Durham Wilson, an artist and writer who aims “to heal and rise the feminine on the planet.” While Wilson is not explicitly a witch, her lessons address the energy and divinity of the feminine, and the concept of the witch as a powerful, healing woman.

Witches—whether people who practice magic and worship nature, or just unruly women who were labeled such—have a long history of persecution. Gathering with a group of likeminded people was not always an option, and there is minimal structure in even organized religious Wicca communities compared to say, Catholicism. There is no witch Pope. Because of this, many witches believe that the only person who gets to define if she is a witch is the witch herself.

However, the Internet is a great thing. There are more options than ever for people around the world to find other like them online and witchcraft is no different.

“There are so many witches out there, witchcrafters, [who] create and work on their own. Sometimes all they need is a couple people to bounce ideas off of, so an online community does that easily,” explained Megan “Blacktail” of the Witches Collective, an online forum and witch community founded in 2010. The Witches Collective features a forum with topics like “spells and rituals,” “pagan living,” and even “astral travel.” They also offer services like reiki healing and spell writing, as well as free classes to “give the new seekers the basics to help give them a foundation in magick.” Continued Blacktail, “Having witchcraft resources online has helped people see how common it is to explore outside your childhood path.”

At the beginning of Mystic School, Wilson encourages listeners to get into a calm space where they can relax and focus. The lessons are structured around certain topics, like the concept of the hero’s journey or aligning yourself with the moon, but leave much room for Wilson to freestyle. She deftly handles students who make noise in the background, or those who hog the mic when it comes to sharing personal stories. She does her best to be an engaged and enthusiastic teacher, assigning homework (imagining what you want to say to your loved ones on your deathbed) and explaining a variety of belief systems (she name-checks everything from the Hindu goddess Kali to Hopi prayers). But the Internet is a distracting place.

Twenty minutes into the first lesson, an introduction and instruction on “awakening,” my ears started to itch from my big headphones. Then I saw I had a new email and checked that while the lesson went on in the background, and somehow I ended up between Twitter and Pinterest when I realized I hadn’t paid attention to anything for maybe 15 minutes. I rewound and started over, vowing to concentrate more.

Maintaining an online community of witches comes with its own issues, some standard, and some unique to the witch community. There are trolls and spam, but according to Blacktail, the very openness of the site makes it hard to weed out serious users from dilettantes. She identified two types of troublemakers: the complete newbies, who “see a spell to make them a werewolf and believe it,” or those who try to use the community for personal, often sexual gain. “The people who use an occult community to spread their personal eroticism,” she elaborated. “They say that they want to perform sex magick with massive orgies or that they want to perform The Great Rite, a very sacred and private rite, in public or with many partners.”

Being a very personal, independent practice, many witches do not rely on community. They can interact when they need to, but still practice in their own ways. It also offers a buffer against the anxiety of meeting people IRL, especially in a community where so many are used to feeling ostracized or outcast for their beliefs. It’s informal, safe, and efficient, something in-person interactions—even spiritual ones—rarely are. “Online, everyone can express themselves with only a fraction of the fear and hesitation they would feel meeting in-person,” said Blacktail.

Despite the problem of new members thinking magic works like it does in Harry Potter, online communities like Witches Collective and classes like Mystic School also allow newcomers to explore a new practice or spirituality without having to fully commit to a new lifestyle. There is no barrier for who gets to sign up. People can make discoveries, seek guidance, and especially when it comes to witchcraft, incorporate new ideas into a personal belief system.

At some point during Mystic School, a phone buzzed in the background. Wilson gently reminded whoever is listening that now should be a time of calm focus. At $222, Mystic School at least involves a monetary incentive to keep listening, but occasionally I heard chimes of people leaving and entering the room. There was no way to know if it was because of a spotty wifi connection or if something else came up.

The Internet makes it easier for our connections to be broad, but also for them to be shallow. This is not a new observation, but when it comes to witchcraft, or any religion or spiritual practice, those shallow connections have more consequence. That woman who thinks magic is immediate may immerse herself and learn she was wrong, or she may move on to another group who tells her what she wants to hear. That man who is only looking for sex can just find it elsewhere. People can find communities, but they can just as easily leave them.

There are many distractions in the world, and whether you call it meditation, prayer, or interacting with the spiritual world, it is supposed to center you inside endless options for your attention. These classes, online communities, and the entire concept of religion fought fighting against my instinct to click to the next tab.

I finished Mystic School, and did all my homework. There were moments where I felt close to the overwhelming emotions Wilson said would happen, whether it was picturing my own funeral or writing wedding vows to myself. She prompted me to think about how many witches were just healers or women who didn’t follow the rules, how I consider my own femininity, and whether inherent femininity is even real. And honestly, the ritual of retreating to my couch for an hour and a half every night for a week, lights low and candles lit, became comforting—even if I was checking Twitter. I did not become more mystical, nor was I spurred to join a witch community. But I learned, and if I need, I can go back and access it any time.