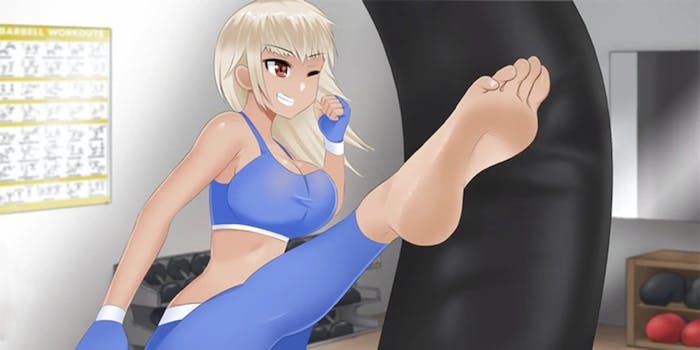 Meet the girls of your dreams—and their toes.

Foot fetish fans, rejoice: There’s a new visual novel on Kickstarter in which players get to know women “from head to toe.”

My Toes Story is an upcoming visual novel by adult development team Osjey Games. The game follows an art school graduate finally setting out on his own in the world. But there’s one problem for the protagonist: He has a foot fetish.

“Can he hide the fact that he likes feet? Everyone would abandon him forever if they found out about his embarrassing kink,” the Kickstarter notes. “What he can’t imagine though, is that some girls out there might be just as perverted as him!”

My Toes Story is a dating simulator: Players manage their day-to-day activities, simultaneously raising money through commissions while going on dates with their preferred love interests. Characters include a 24-year-old MMA fighter with size 10 feet, a 22-year art teacher with size 7s, and an otaku college student with a modest size 6.

Foot fetishism is incredibly prominent; academic studies find “feet and foot accessories are the most fetishized of all non-genital body parts and objects,” Live Science reports. Games writer Kate Gray, who specializes in sexuality in games, argues there is a neurological basis for the fetish: Feet and genitalia’s erogenous zones are closely linked in the brain, which explains why “wires get crossed very easily.”

“But that’s a boring scientific reason, and it downplays the very real intimacy and sensuality that can come from feet,” Gray told the Daily Dot. “Though I’m not personally into feet, I am ticklish—and erogenous zones tend to be the more sensitive ones, so it makes sense that feet are, very simply, fun to include in sex!”

My Toes Story’s Kickstarter launched on Thursday and has an $18,128 goal. By Friday afternoon, the game had just over $500 in funding. Pledge rewards range from a Steam key with an 18+ patch to a custom original character for just over $3,000.

The Daily Dot reached out to Osjey Games for comment.