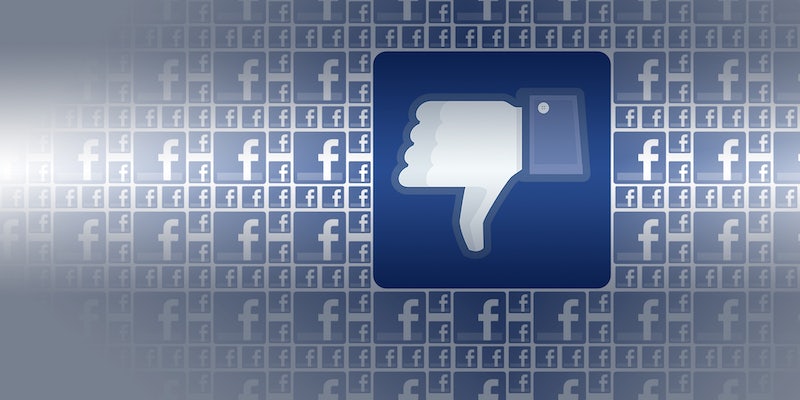 Facebook users appear to be stealing images of children to earn dollars through clicks.

It’s a familiar scenario: You’re scrolling through Facebook and you see a picture of a child with no legs, or maybe it’s a beautiful girl with a prosthetic limb, or someone recovering from cancer.

Take, for example, this post of Sonja Darrell, a colon cancer survivor. Except Darrell didn’t post it. Humaria Yasmeen did to increase activity on her personal profile. 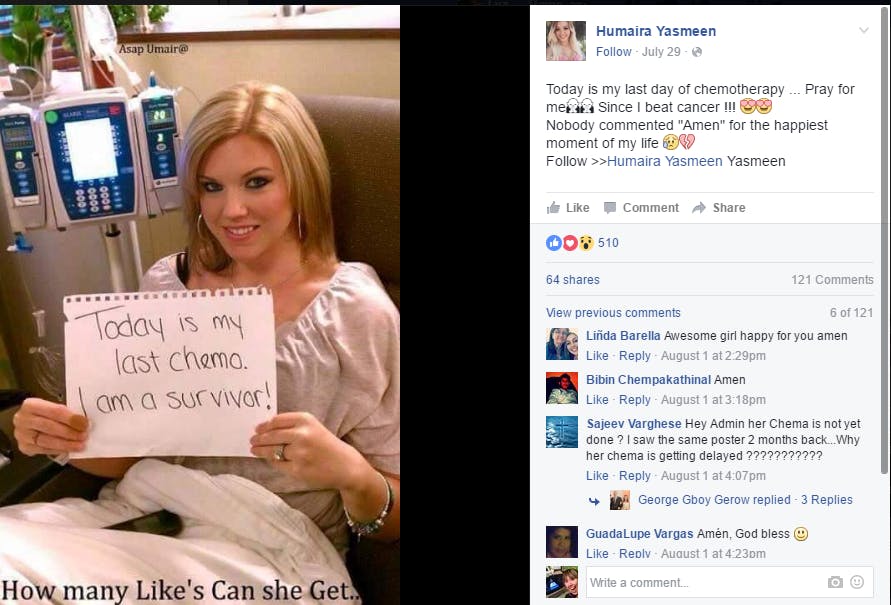 Or this one, from Imran Ghori, who uses what appear to be stolen or altered images of children with birth defects and disabilities as clickbait. 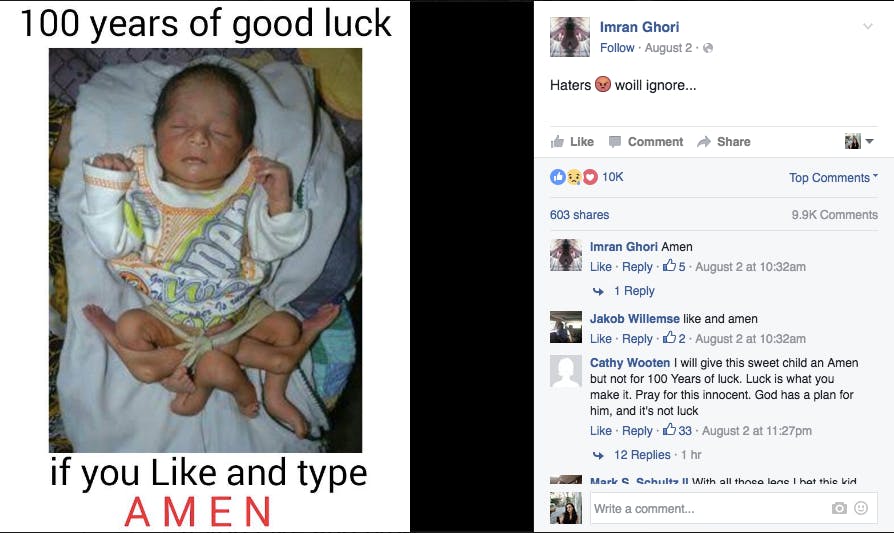 Yasmeen and Ghori did this work as “publishers” at MyLikes. Anyone can become a publisher, which means they can pick from the company’s selection of links to post to their personal profiles and then get paid for the traffic they generate.

However, a Facebook search for MyLikes publishers reveals a host of suspicious profiles. (One had a profile image of Wiz Khalifa, as if we wouldn’t notice.) And when you scroll through their profile pages, the contents are even more questionable, littered with stolen images that encourage people to “like” or type “amen.”

As you can see from Ghori’s page, children with disabilities and birth defects seem to get the most traffic, with over 14,0000 likes for photos like this one (which, in a reverse photo search, comes up 144 times in various incarnations of this story). 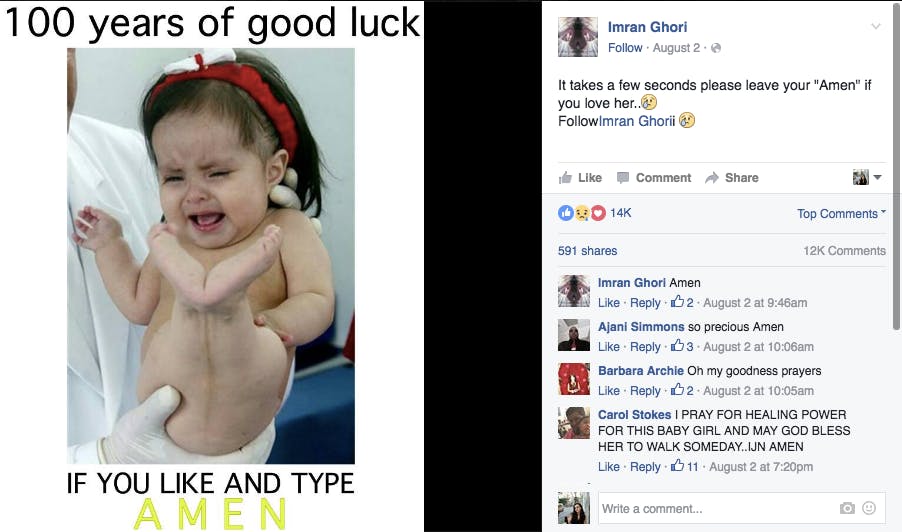 Stewart Campbell, who was a publisher on MyLikes a year ago, told the Daily Dot via email that it’s “common practice” for publishers to share stolen images and ask for likes in order to increase activity on their profiles, get more clicks, and ultimately (hopefully) receive more earnings. He said he never heard that advice directly from MyLikes, but that it’s in line with black hat marketing, which involves improving a site’s SEO via means that aren’t approved by search engines. When the Daily Dot reached out to Facebook about MyLike’s practices, however, it said it was unaware of the specific company, but noted that stolen images do violate its community standards. In another email, a company spokesperson said Facebook doesn’t allow people to use misleading or inaccurate information to collect artificial likes or shares, and suggested people report when such exchanges occur.

The thing is, practices like this aren’t new—not to Facebook, not to the public. As the Daily Dot reported in 2013, companies buy Facebook pages and use them to generate organic clicks to their own pages, which are often populated with stolen images and links to spam. It’s common enough that Facebook has recently been cracking down on it by cutting back the organic reach of company pages and trying to eliminate clickbait. But when it comes to personal pages, Facebook can still be a minefield of spam and spurious links from people you supposedly trust.

It’s a trend fueled by companies like MyLikes, Viral9, and Fans2Cash. Fans2Cash claims, “Top publishers are making between $500 and $3,000 per day,” all for posting links on Facebook. This business model clearly violates the FTC guidelines for disclosing advertising on blogs or social media. Yet the guidelines are just that, guidelines, and don’t have the weight of the law behind them.

To see what this was all about, I signed up to be a publisher with MyLikes. I was first asked to create my own website, which I could do by choosing a template and a domain name. (Custom domains are available for a fee.) Then I was given a choice of content to share on my site. The first suggested story was about Michael J. Fox losing his battle to Parkinson’s. I added the story and clicked the link, and I was shown one sentence and an image of the actor in the movie Back to the Future.

But a quick Google search showed that the story stole content from a February 2016 Radar Online article, which has since been deleted. 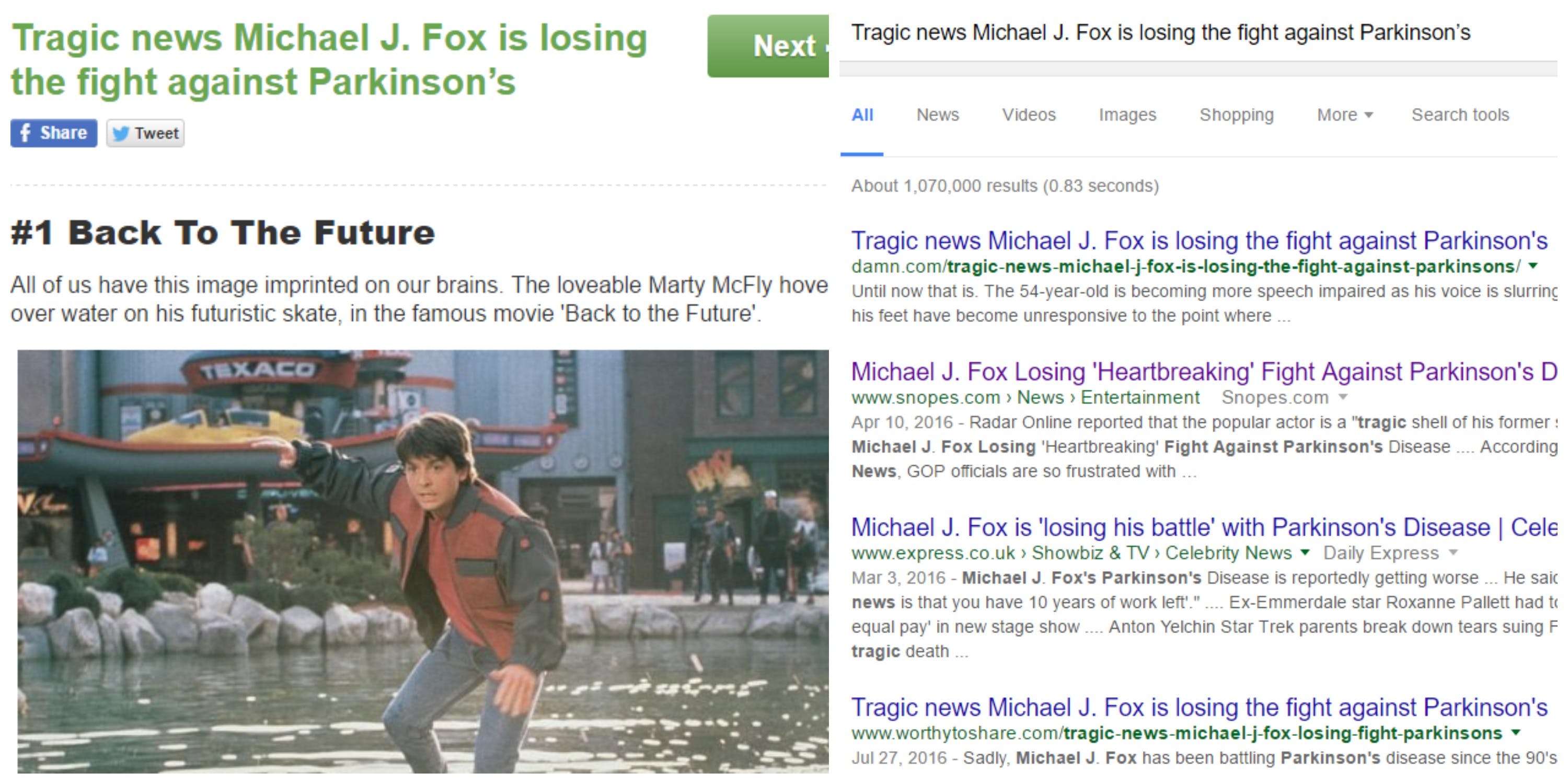 Every story that populated my site had was stolen content, reproduced from another clickbait site, populated on a page that was filled with even more clickbait ads. 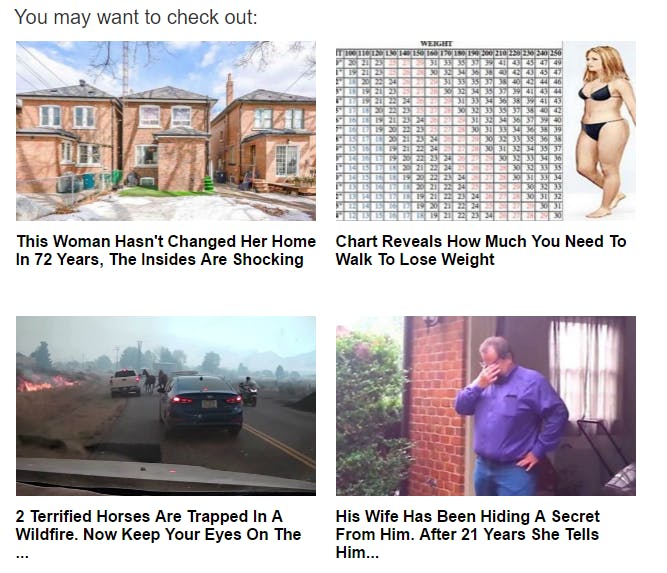 Also, as soon as I joined, MyLikes let me know that a previous top earner had netted $1,872.88 in a single day.

But it seems the chances of earning such a payout are slim, as Google searches for Fans2Cash and MyLikes reveal a host of forums where people complain of being stiffed of earnings, or left completely dry.

Campbell wrote on HubPages that MyLikes refused to pay him for clicks, claiming the company wasn’t legitimate:

However, when I hit 3,000, they said they were only going to pay for 260 of them. Then, when my view count hit 5,990, it said that the video was disapproved. Now the money that I should have received £80.50 (when converted from USD). However, my view is that they simply didn’t want to pay money, since they’ve been paid by the adviser and didn’t want to pass on the rewards to me.

Campbell told the Daily Dot that he tried to sign up again recently and failed to receive a payout. Fans2Cash has a $500 minimum payout for publishers, making it very hard for people to earn a check.

They had told me that I had used fake views on YouTube (which I hadn’t) in order to scam money out of them. Interestingly, it would have actually cost me more in fake views than the money I would have got back from them. I had pointed this out to them but they ignored my emails. A member of MyLikes contacted me approx 8 weeks ago asking if this matter could be sorted out… Suffice to say when I emailed them, I never heard anything back.

MyLikes founder and CEO Bindu Reddy told the Daily Dot that she blames a few spammy users for tarnishing her company’s reputation. She points out that MyLikes publishers are encouraged to write their own original content. “MyLikes sources content from our publishers… In addition to that, we also sometimes write our own content, and if we do write our own content, that is written by a group of 15 freelance writers.”

She says that duplicate content could be because other people are stealing from MyLikes. And while she admits the stories are inspired by other sources, the wording in the articles is always unique and there are always links to the original sources. These source links, Reddy notes, are found underneath the pictures, rather than embedded in the article.

“Sometimes the headline is taken from someone and sometimes we write our own, and I don’t dispute that headlines are inspired by other sources, but I do dispute that the content is,” she said.

Reddy sent links to original articles on her own MyLikes site, titles like “The Crazies Costumes in the Olympics” and “Jobs That Will Soon Be Taken Over by Robots. Creepy…”

However, when it comes to “amen” photos, like the ones Ghori posts, the Daily Dot could not find any source links. When asked about publishers sharing stolen images, Reddy said if any publisher is sharing images or stealing content that isn’t theirs, they will be removed from the platform. The morning after I flagged Ghori and Yasmeen, Reddy emailed me to say they had been banned from the site.

Additionally, she said that based on our feedback, MyLikes would like to do a better job of properly attributing sources.

As for the allegations about withholding pay, Reddy noted MyLikes has been around for over six years and would not be as successful today if publishers were not able to earn money.

Viral9 has a similar model to MyLikes, asking users to create pages, populating them with content, and then paying per click. But I was unable to make contact with anyone who had actually used Viral9 to determine if it lived up to its claims. I was unable to sign up for its service, and emails to the company bounced back (though multiple Viral9 link groups seem to share links and clicks in order to earn more money). Fans2Cash didn’t return Daily Dot’s numerous requests for comment, either. Attempts to reach out to publishers Yasmeen and Ghori also went unreturned.

In the meantime—and despite being allegedly banned—Ghori’s pleas for amens carried on.

Correction 10:15am CT, August 12: Campbell said it was “common practice” for publishers to share stolen images, not that he posted ones he didn’t own.