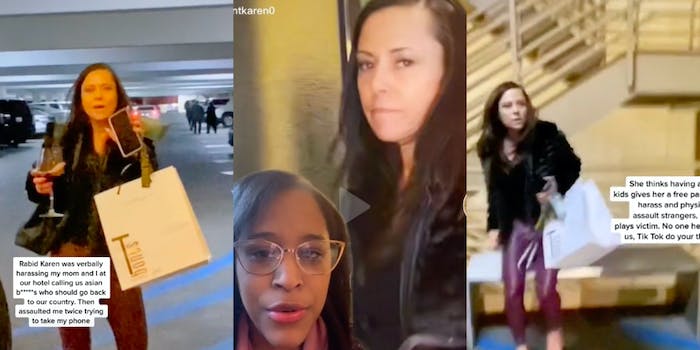 Here's' what we know about the viral incident.

A so-called “Karen” was filmed confronting a woman and swiping away her phone after she’d allegedly told the woman recording to go back to her country.

In the initial TikTok video, the creator filmed the white woman as she attempts to take the phone away from the woman recording. They argued and the Karen can be seen running away from the camera. It’s unconfirmed what started the argument but the text in the video says, “Rabid Karen was verbally harassing my mom and I at our hotel, calling us Asian b*****s who should back to our country.” It continued, “Then she assaulted me twice trying to take my phone.”

During the incident, the Karen was holding a glass of red wine and tried to excuse her actions by saying that she is a mom to Asian kids. “My fucking kids are asian,” the Karen can be heard saying in the video. More text appeared in the video which reads, “She thinks having Asian kids gives her a free pass to harass and physically assault strangers, then play victim.” The creator wrote that “no one helped” her or her mom amid the incident.

The video has over 177,000 views since it was posted yesterday.

A man who is assumed to be a hotel employee is seen getting involved, asking the women what is going on. She calmly told the man that she “was just reading and these guys are harassing me.”

The details of the incident remain unclear. However, the popular TikTok account @auntkaren0 boosted the video to her more than 1 million followers. She recapped the video for her followers and played clips from the video.

“Just because you adopt or have children that Asian does not mean you are Incapable of being racist,” @auntkaren0 said in her video and then she asked for anyone with more information to leave a comment.

The Daily Dot reached out to the creator for comment.