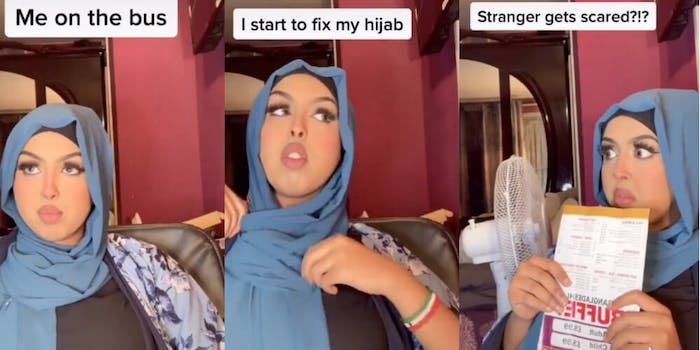 Their videos are ascending them to TikTok stardom.

Muslim teens are using humor and TikTok to combat Islamophobia–and their videos are ascending them to TikTok stardom.

The videos highlight the struggles faced by Muslim women, especially those who choose to wear hijabs. In one video, TikTok user @Aaliyahthe1st portrays both herself and a fellow bus passenger. The fellow bus passenger looks extremely concerned and afraid as she adjusts her hijab.

A duet shows Aaliyahthe1s presenting a white family with a Somali passport. Text appears that reads, “And I’m not actually from Islam” as the family excitedly hollers and screams.

Another TikTok user, @ebtisannn, shared her own take on the duet. Instead of a passport, ebtisannn holds up a sign that reads, “Allahu-akbar means God is great” as the same white family erupts in excitement.

But many of the videos are more subtle in their efforts to combat Islamophobia.

For example, many of Aaliyahthe1st’s videos are about makeup and beauty. Meanwhile, TikTok user @rere.lahx shares videos that show off her love for taekwondo and playful dance moves. Through these videos, viewers are able to peer into a typical day in the of a young Muslim woman.

Rere.lahx, who is 16 years old, told i-D that she started uploading to the app to try to stamp out the negative perception some people have of Muslims.

“I wanted to show that we’re positive people, we’re just like them, and we’re all about fun and jokes,” Rere.lahx told the magazine.