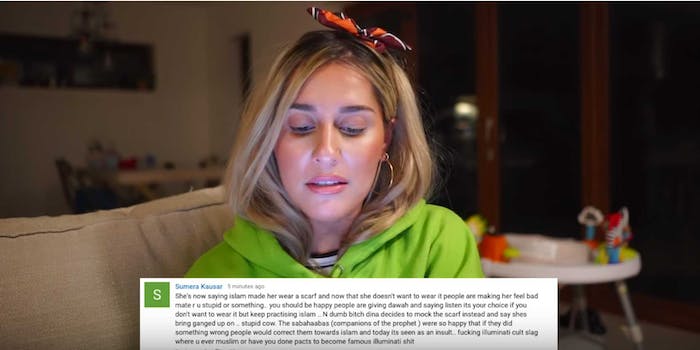 YouTuber reads 47 minutes of abusive comments after giving up hijab

Dina Torkia read out messages she has received since saying the hijabi community is a 'cult.'

Dina Torkia, a British Muslim YouTube star, has revealed a series of abusive messages and threats she’s received since she decided to remove her hijab, the headscarf that many Muslim women wear.

Torkia, who goes by the username Dina Tokio on social media and has hundreds of thousands of YouTube subscribers, has gained popularity as a fashion blogger who caters to the market of modest fashion.

In October 2018, she said in an Instagram story, “This ‘hijabi’ community is starting to become a very toxic cult.. the obsession and entitlement is appalling.. I’m out.” She later clarified in a tweet that the comment was in reference to “the onslaught of slander and insults I’ve received from a community that I was very much a part of and helped build… all because of my personal decision to basically wear it when I want to.”

My thoughts on everything being said… pic.twitter.com/c7ZNNoCDmD

She also said the hijab would always be a part of her life and heritage.

On Tuesday, she released a 47-minute long video of her reading out the messages she has received since.

One user wished death upon her and her family, and others called her “ugly” and a “whore,” among other abuses.

Since she shared the video, she’s also received a lot of support from her fans:

“I have no idea why this video was recommended by YouTube. Watched 9 minutes. Turned it off. I understand you took the Hijab off. It’s your choice. I’m a convert,” reads one comment. “These Muslims who attack you are disgusting. They also attack me because of my tattoos but not to the extreme like I just watched. Any how, don’t show your children.”

“It’s a really weird how ppl talk deeply about islam and deen and hell yet cuss sooooo much in the SAME comment,” wrote another viewer.

“I’ve actually never watched so much of a longer video. I’m so sorry Dina. I’m a mid-twenties Muslim girl whose gt her roots in both the west and the east (like you). These people are (forget religion) not GOOD people, they are bad UNDIGNIFIED people,” another user wrote on YouTube.

People are rallying for her on Twitter as well:

Saaaaame. It’s HER life. HER decision. why the F does it affect any one else?! It was horrible because of all the women who bashed her and said horrid things. Guys are pigs, but for a woman to attack a woman in such a disgusting way, I felt attacked!

Also with this whole Dina Tokia drama, it reminded me of that as well. How hijab is a choice untill you want to take it off.

Dina Tokia spent almost an hour reading out comments she's received from Muslims (including Muslim women) after she stopped wearing the hijab – and she hasn't blurred out a single name. https://t.co/xzjiM0F0qd

I just saw a video of Dina Torkia reading hate comments for 47 minutes straight…I couldn't even get passed the first minute. U don't have to agree with what she's done or what she's said, but the fact that so many of you think it's okay to talk down on someone like that is

If ur response to this whole Dina Torkia situation is just cussing at her, wishing bad on her and her family, and degrading her as a human being, then instead of worrying about her imaan, maybe u should be worrying about your own. This isnt what Islam or being a Muslim looks like

Torkia did not respond to requests for comment from the Daily Dot by press time.