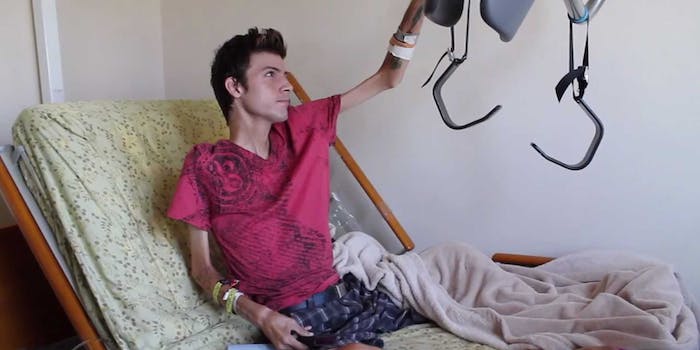 Mike Oliveri is desparately trying to raise enough money to be able to visit the Mayo Clinic.

Oliveri was born with muscular dystrophy, a disease that weakens the musculoskeletal system and locomotion. Better known as Mikey Wheels online, he’s shared his journey and everyday life through his YouTube channel and blog since he moved from New Jersey to California five years ago.

Over the past 15 years, he’s suffered through a number of painful stomach issues, but he was able to bear through it until recently. The pain has now made it almost impossible for him to eat, which caused rapid weight loss. At 6’1″ Oliveri weighs just 75 lbs, and he’s dying despite his efforts to actively pursuing solutions.

There is one place in American that can help him, though: the Mayo Clinic in Rochester, Minn.

Oliveri has more conditions than he can count, but with over 100 Gastrointestinal doctors at the Mayo Clinic, they can possibly help him figure how those affect one another and treat them.

His appointment is on Aug. 13. He doesn’t have the money to afford the help he needs, so he turned to Indiegogo and GoFundMe to raise the money possible to get to Minnesota and receive treatment.

The Reddit community, which has rallied for causes and helping those during times of need in the past, has shared the video to raise awareness; at one point, three different posts featuring Oliveri’s video appeared on the front page of Reddit.

“I hope that I can receive some help for the help that I need to get better and get healthier so I can live,” Oliveri said. “I want to stay alive. It’s a nice feeling.”