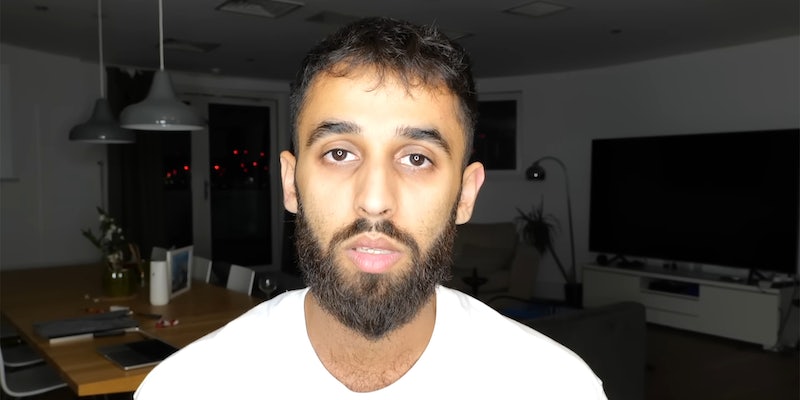 Users are accusing Merali of racism.

YouTuber Murad Merali is facing backlash following accusations that he wrote racist captions for fetish videos. In a YouTube video about the accusations, Merali denies that he wrote the captions, though he confirms that some of the videos are his.

Merali posts daily videos about Love Island, a dating competition reality show, and has garnered over 290,000 subscribers on YouTube. On Monday, screenshots of foot fetish videos that allegedly feature Merali surfaced on Twitter. Captions of the videos include racial slurs and racist language.

The now-deleted screenshots were posted by @winxclu66, who tweeted at Merali and asked him about using racial slurs shortly before posting the photos.

One of the screenshots that show Merali’s feet includes racial slurs about Asian people, and one includes slurs about Black people. In the former, the caption describes “programming” someone’s mind to “make them realise” they are dirty, inferior, and “born to be used.”

In the latter, the caption says that a Black man “[brushes] the streets and [lives] on low income.” The caption also describes a Black man as a “monkey” and as “dirty.”

Other screenshots and screen recordings posted by czarina_____ show foot fetish videos posted by user ArabMasterBoy. The Twitter user says that Merali is behind that username. Other videos show include someone being slapped by someone else’s feet—allegedly Merali’s, according to @mk_mcr2.

On Tuesday, Merali posted a YouTube video addressing the screenshots. In it, he vehemently denies that he wrote the racist captions that accompany the videos in viral tweets.

“The written content is not me. The severe, derogatory comments are not written by me and I will stand by that,” Merali says in his video. “This is not who I am.”

He says that some of the “content” that has circulated on Twitter also is not of him—though some of it is. The YouTuber says that he hasn’t made foot fetish content in “the last five years” and doesn’t currently.

Merali says that he was “brutally” raped frequently, beginning when he was 14 years old. He also describes having feet stuck into his mouth, which he says is what caused him to develop a foot fetish.

“This is what happened to me and this is what developed,” Merali says in the YouTube video.

He says that he continues to think about when he was raped, experiences suicidal ideation, and has struggled with his mental health. Merali also clarified that he was not a sex worker but does say that the foot fetish videos were associated with making money in order to escape the person who was raping him. He also prays on camera to die.

“Because I can’t do this anymore,” Merali says.

Many commenters on Merali’s YouTube video didn’t feel he took accountability for his actions. Some didn’t believe his denial of writing the racist captions.

“For someone who is always calling out others for their own wrongdoings and urging them to take accountability, I haven’t seen an ounce of that in this video,” Zemira Niles commented. “What a damn shame.”

Others assumed that Merali was engaging in race play—a kink that focuses on the racial dynamics between consenting participants—because the videos focus on Merali’s race and the race of other men shown.

“When you’re ready to actually be honest and transparent, and discuss the raceplay, shout us. Dude suck all the damn toes you want,” @Charlene Charlton commented. “As long as the toes are over 18 and consenting we don’t care. It’s the slurs that people are rightfully pissed about.”

“It makes a mockery of people who have been raped/molested. Being a victim of rape doesn’t turn you into a racist,” @kaomi_k tweeted. “He’s trying to garner sympathy. Racism is not a trauma response.”

“I want Murad to ask himself… if someone else made that apology video… and he reviewed it… what would he say… ?” @me98685693 tweeted. Murad is known for championing accountability among Love Island contestants in his videos.

“Trying to guilt us into forgetting all the racism that came from his dirty mouth,” @bobtoedenkirk tweeted.

The Daily Dot reached out to Merali via email.