Polygraph's study breaks down the dialog of 2,000 movies by characters' gender and age.

If you were heartened by the news that Sweden had begun rating movies according to whether or not they passed the Bechdel test, then you’ll appreciate the chance to search Polygraph’s movie-dialog gender ratio database. The database compiled all of the spoken lines in 2,000 movies and broke down the quantity of lines by gender and age.

You may, however, be less happy with its findings, which confirm that anything approaching gender parity in film dialog is a long way off. 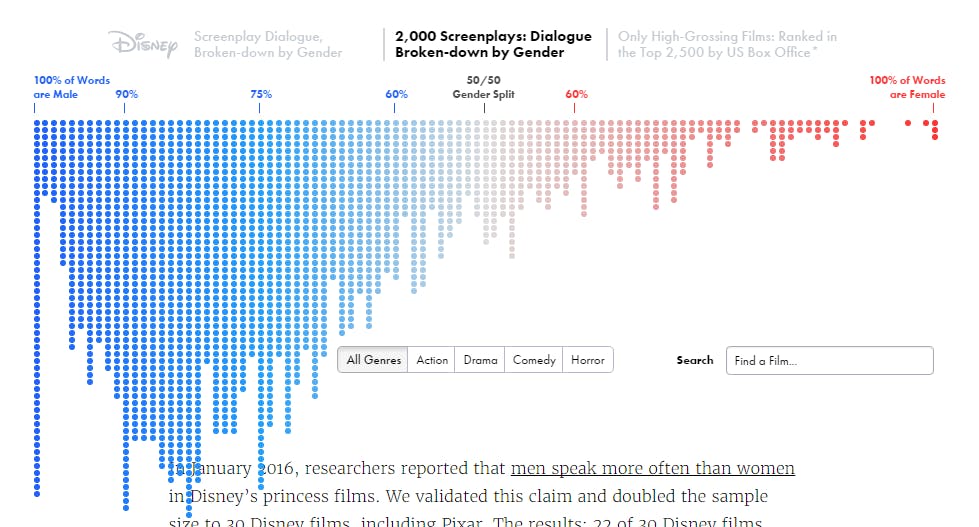 Polygraph developer Hanah Anderson and editor Matt Daniels previously analyzed movies that failed the Bechdel test—which assesses whether two female characters in a film discuss something other than a male character—and their new database is the result of criticisms of that method.

“Commenters were quick to point out that the Bechdel test is flawed and there are justifiable reasons for films to fail (e.g., they are historic),” Anderson and Daniels wrote. “By measuring dialogue, we have [a] much more objective view of gender in film.”

This is the largest study of its kind so far. A 2015 University of Southern California report analyzed only 700 movies released between 2007 and 2014. That report found that only 30 percent of speaking characters were female, with only 11 percent of movies featured gender-balanced casts or divisions of speaking roles. Polygraph’s results don’t show a major departure from USC’s findings.

The Polygraph database’s most interesting feature isn’t its larger sample pool, but the fact that you can search for movies based on genre, year of release, and level of gender parity.

A search for comedies featuring more than 75 percent female dialogue yielded only 18 titles, including Mean Girls (82 percent) and Easy A (89% percent. The database also reveals that Dead Poets’ Society contains more than 94 percent male dialogue, while The Men Who Stare At Goats has entirely male dialogue (evidently the clue was in the name).

Polygraph’s study also allowed researchers to fact-check the recent claim that, in animated Disney films supposedly centered around a lead female character, like Mulan, male characters still as many as three times more lines than their female counterparts.

Polygraph found that many of Disney’s female-led movies do indeed support this trope, dubbed the “Smurfette principle” by Katha Pollitt 25 years ago. The site concluded that 22 out of 30 female-led Disney films had mostly male dialogue. This ranged from Wreck-It Ralph‘s score of fewer than 69 percent male speakers to The Jungle Book‘s score of 98 percent male speakers.

Four movies—Frozen, The Incredibles, Into The Woods, and Tarzan—featured approximate gender parity in terms of the number of characters with speaking roles. Inside Out, Alice in Wonderland, Sleeping Beauty, and Maleficent all featured at least 60 percent female dialogue.

When it came to actors’ ages, Polygraph found the same thing that USC had found: “no female actors over 45 years of age played a lead or co-lead role.”

“Dialogue available to women who are over 40 years old decrease[s] substantially,” Anderson and Daniels wrote. “For men, it’s the exact opposite: there are more roles available to older actors.”

Anderson and Daniels concluded that, while the findings might come as no surprise, especially to women in the movie industry, there had previously been a lack of data to support these lived experiences.

“We spent weeks just matching scripts to IMDb pages,” they wrote. “It’s still not perfect, but we’re now in a much better place than [just] ‘you know…women are never love-interests when they’re older than 40. ¯_(ツ)_/¯.'”