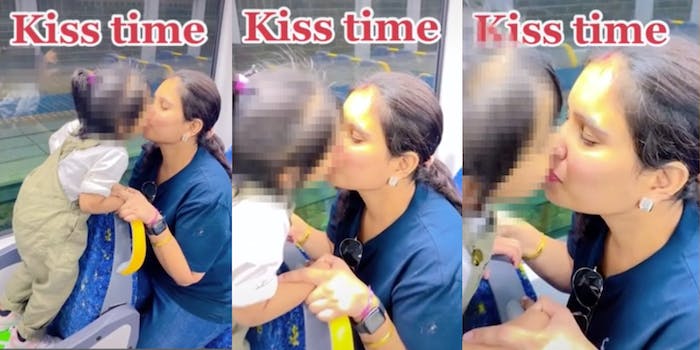 ‘Why did you kiss your kid like that?’: TikTok mom sparks debate for how she kisses daughter in viral video

'Why are you making out with your child on a train?'

TikTok users are divided over a clip shared by a Sydney mother, showing as she and her daughter share a series of kisses on an area train.

User @dhruvtaraaggarwal103 shared the clip to her TikTok account on Monday. It is accompanied by a number of hashtags, including #kids, #kiss, #kisstime, and #motherdaughterbond. The clips shows a young girl standing backward on a bus seat, facing her mother. Both of them have their eyes closed.

The two exchange a series of brief pecks, as the little girl leans in and repeatedly plants her lips atop her mothers. A slow, gentle tune accompanies the clip.

But viewers found themselves torn over what some considered to be an excessive display of affection.

“Why are you making out with your child on a train? Why,” one user questioned.

Others outright told the mother, “Do not kiss your child like that.”

Not all viewers, even those confused by the clip, were quite so harsh. Several people were merely curious, and asked the mother for her reasoning.

“Serious question, why did you kiss your kid like that,” one user asked. “That doesn’t make any sense to me and I would like to hear your reasoning.”

Plenty of people also came to the woman’s defense—particularly other mothers. They told other viewers to “calm down,” noting that “She isn’t even kissing her kid. She is just standing there and that’s her child doing it all.”

The backlash ultimately escalated so much that the mother turned comments off on the video before shutting down her TikTok account entirely.