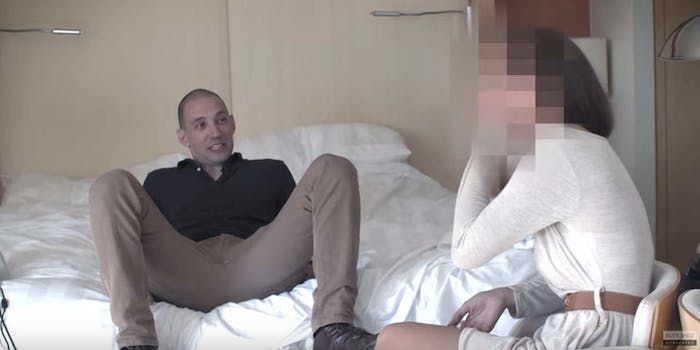 Meet the winners of the ‘World’s Most Beautiful Vagina’ pageant

Things got far more interesting after the contest ended.

When the Daily Dot wrote about the world’s first-ever vagina beauty pageant earlier this year, it sounded like a unique and oddly body-positive idea. But a behind-the-scenes look at what the contest finalists had to go through after winning paints a slightly more troublesome portrait.

In a video for Elite Daily, we meet the three winners of the pageant, who were announced in July. They were flown from the U.K., Germany, and Hungary to Los Angeles to meet contest organizer and “Autoblow” sex toy-maker Brian Sloan, and have their prize-winning nether regions 3D-scanned for replication.

The winners sit bottomless on a bed, their faces blurred out or covered like a bank robber’s as they’re scanned by Sloan using the 3D-scanning device. One contestant admitted the process was a bit uncomfortable. In an interview, Sloan kind of agreed.

“It was easy to think about it, that it would be fun or funny to 3D-scan them before I knew them, to like, see them naked,” he said to the camera. “But now that I know them and they’re really nice and sweet, I feel a little guilty.”

“I have a right to decide what I want to do with my body, and that’s what feminism is about.”

As well he should. “My friend spread my butt cheeks when they scanned my anus,” one of the winners says in the video. And after all that, it turned out her anus was not “textured enough” to scan. “So we’re down one anus,” Sloan flippantly remarked. Another winner’s boyfriend is in the room, and he can hardly watch the display.

Despite the invasive nature, one of the “Most Beautiful Vagina” winners actually felt great about it: “I have a right to decide what I want to do with my body, and that’s what feminism is about.”