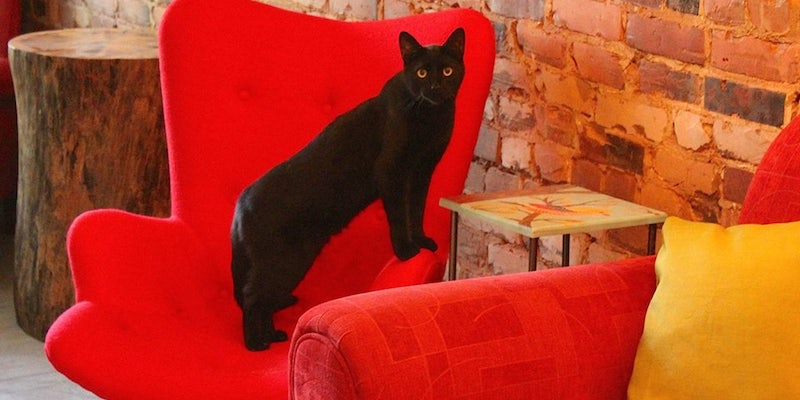 An interview with the owner of Montreal’s first cat cafe

We spoke to Summer Geraghty, owner and animal lover.

May the Internet delight: Cats have taken over a small corner of Montreal.

Summer Geraghty’s cat cafe is busy enough on opening day that she has to take my call from an office in the back, away from the crowd noise. “We didn’t have a line out the door, but it’s going well,” she said.

Geraghty’s Café Venosa is named after her 16-year-old cat, which she rescued from the Montreal SPCA. She previously worked for the animal rescue organization for “five or six” years, advancing from volunteer to management over that time.

“I realized I had been thinking about [the cat cafe] for five years after hearing about them, so I started this one,” she said. Café Venosa is a vegan cafe and exhibition space that just happens to hold its cats as the guests of honor. The cats are adoptable, but the cafe is their home until someone fills out paperwork and takes one home. She thinks it might be the future for how animals are brought into a family home.

“A lot of people are wary of shelters,” she told the Daily Dot. “This way, they get to meet the cats, come back again, and take time making a decision.” The cats also have the benefit of being exposed to a variety of different people every day, making their eventual adoption that much more likely.

For all the challenges associated with being a vegan cafe that hosts shelter cats from the Montreal SPCA, Geraghty says the biggest challenge has been sustainability. Not only will Café Venosa be a meat-free cat palace, it also aims to monitor what it throws away and how it does so.

“We’re finding stuff to do with the coffee grinds,” she said. “We know someone who uses it to make fertilizer. Another friend makes body scrubs.”

Montreal’s first cat cafe is one that checks a lot of boxes. Cats will live there, probably quite happily. There will be no animal products used in the preparation of any food. And at the end of the day, Geraghty’s committed to finding the best place for the shop’s garbage, which seems an admirable and uncommon quality.

But we all know you’re heading there for the cats.