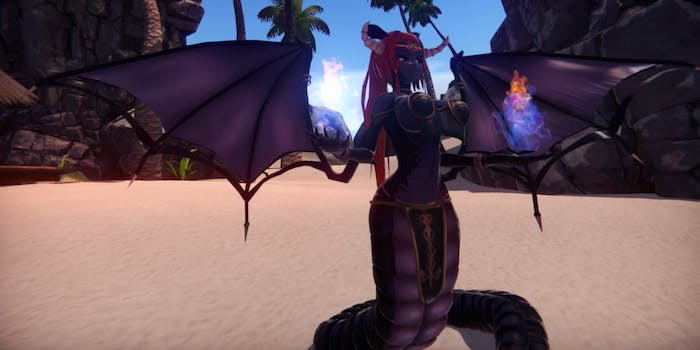 What is Monster Girl Island, and where can you play it?

Here’s everything you need to know about this 3D adult adventure.

It’s extremely rare that a single person can be behind the creation and development of a successful video game. But with Monster Girl Island, Indie game creator Redamz is taking on the monumental task of creating a rare single-creator game—and executing it with astonishing skill.

Interested in giving Monster Girl Island a try? Here’s everything you need to know to get started with this impressive 3D adult adventure.

What is Monster Girl Island?

Thus far, players have only the prologue to enjoy. But the prologue is nothing to scoff at. It offers a handful of monster girls with simple dialogue options and entertaining missions to help players get close—and I mean close—to their new island companions.

Monster Girl Island feels a bit like an adult-themed version of Animal Crossing, inviting players to explore a sun-soaked island full of mermaids, elves, kitsune, dragons, and more. Gentle music accompanies players as they wander a simple but stylish world despite clearly still being in its early stages. The environment is open and inviting, but many areas remain inaccessible, leading to a sometimes empty feel.

Thankfully, this void is filled with characters wandering the island. Gameplay allows players to explore the island and engage in “events,” which flesh out characters and lead to sexual encounters.

But before you can entice a character out of her barely-necessary clothing, you’ll typically have to engage in a simple side-quest or character-building conversation. Side quests are entertaining and varied enough to keep you distracted from the real action for hours. Mini-games see players participating in races, collecting items for NPCs, fishing, and even hunting. There are enough options for side play that some players may find themselves distracted from the core purpose of the game—getting down and dirty with the island’s busty inhabitants.

Monster Girl Island is shockingly fleshed out for a game created by a one-man team. Redamz has been chipping away at his vision for more than three years, slowly creating a rich and engaging world for players to enjoy.

Gameplay features an emphasis on exploration and dialogue, providing a large and open map for players to traverse. The original soundtrack is gentle and satisfying, reminiscent of everyone’s favorite YouTube study channel mixed with serene elevator music.

Events allow for branching options, adding weight to player decisions. Loads of dialogue options build character depth and flesh out the island lore, and each character reacts differently to interactions. In between enjoying their sexy monster companions, players can collect items, use their (broken) smartphone, and play with a costume shop that thankfully avoids any micro-transactions.

Where to get it

You can play Monster Girl Island: Prologue for free on Steam. The game’s Steam page notes that the current release only offers about a third of the main story, with far more still to come. The final version won’t be free, however, so snatch up the introductory version of the game while you still can.

The game’s creator, Redamz, had a massive following on Patreon until he was forced off the platform earlier this year. Following a review of Monster Girl Island, Patreon pushed for changes to be made to the familial relationship between two of the characters. Rather than alter the game, Redamz chose to leave Patreon—and his 13,000 patrons—behind. He opted to publish the game on Steam and itch.io, where it is also free but invites players to donate “what you think is fair” to the creator.