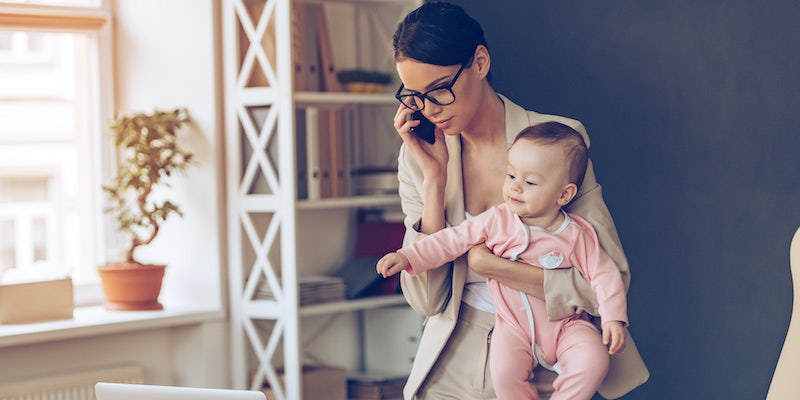 Glennon Doyle Melton is a best-selling author and sought-after speaker—so why do people still professionally refer to her as a parent first?

When New York Times best-selling author Glennon Doyle Melton recently announced her engagement to soccer star Abby Wambach, the big shock wasn’t Melton’s engagement to a woman—she’s been outspoken about their love for months—it was the way an uber successful woman was referred to simply as “Christian mommy blogger” in headlines for stories across the web.

Melton is, in fact, the creator of the website Momastery, but she has certainly accomplished enough to lose the “mommy blogger” lead-in and replace it with something more distinguished. She’s written two best-selling memoirs, delved into serious topics such as her struggles with bulimia and addiction, and spearheaded a well-known nonprofit organization that has raised millions for families around the world. She’s also a sought-after speaker who tours the country speaking in front of packed audiences. Once she appeared on Oprah and joined the ranks of her illustrious book club, it was time to start referring to her as an accomplished “author” at the very least.

Other successful writers, who also happen to be mothers, have had trouble shaking the title, too. Despite covering everything from sports to news to politics to, yes, parenting, reporter Sarah Cottrell says “mommy blogger” is the identity that follows her. “As a professional writer, I aim to be as broad as possible to demonstrate that I can be funny, serious, do interviews, and research. I need to be versatile. So when someone calls me a ‘mommy blogger’ it feels like I am being boxed into something trite.”

Jeanne Sager, who was a parenting writer and editor for eight years, says the term has often made her feel pigeonholed. “It was hard work, real work,” she says of writing and editing parenting content. “And yet I often felt that people looked down on it because of the subject matter… As if I can’t be a ‘real’ journalist if I’m reporting on scientific studies about circumcision or an FTC ruling on advertising booze to kids versus any other scientific study or FTC ruling that doesn’t involve small people.”

The fact that the best professional title people use to describe women who write about families has “mommy” in the name is disappointing. Not only because it doesn’t accurately describe their work, but because there are often negative associations that come along with the term, too.

The word “mommy” itself is infantilizing and demeaning, a way to keep a woman and her value in check, when “parenting writer” or simply “writer” would suffice. Then there is the “blogger” part. While many bloggers do earn an income, the common assumption about blogging is that it is unpaid and requires no real prerequisites—just a keyboard and opinion. Of course, many women who never write outside of their own blogs have a great deal to offer. But no matter the forum—their own blogs, websites, or in print—there is an unfair stigma that writing on topics of parenting requires no skill set, one that is especially hard for mothers to escape.

“The word ‘mommy’ itself is infantilizing and demeaning, a way to keep a woman and her value in check, when ‘parenting writer’ or simply ‘writer’ would suffice.”

I, too, can relate to writers’ discomfort with the term. While I credit blogging for jumpstarting my writing career—because why not start by writing about the very thing you’re entrenched in and therefore have a lot to offer on the subject—it’s been a very small portion of my overall contributions as a writer. The assumptions that my writing was just a hobby simply because I wrote often about parenthood got to me, even after I made significant contributions to my family’s income and writing for my dream publications.

The truth is, I haven’t had time for a “hobby” since I became a parent and I seldom took gigs without pay, even in the early stages of my writing career. But years after maintaining work as a freelance writer, I still shy away from questions about the content I write because whenever I admit to writing about motherhood or parenting, the response is always the same: “Oh, so you’re a mommy blogger.” I feel my skin grow hot and my collar grow tight as I struggle to convince people that what I do is actually work and that I actually earn a solid living as a writer who frequently writes about motherhood. But I’m guessing if Melton can’t shake the term, as well as other best-selling authors who got their start as bloggers first, neither can I.

It’s not that being in the “mommy blogger” category is a shameful place to be. Mothers who blog about their experiences, whether paid or not, have sway and can jumpstart careers this way—and many make good money. Personally, when I was a young, extraordinarily overwhelmed new mother, reading parenting blogs felt like a light in a storm. It had value, the same as any creative work does.

But the fact is, women still have to work harder to prove themselves in just about every sphere, especially after they become parents. They have to reconcile this paradox: That, traditionally, the most important “work” a woman is told she can do is raise children. Yet when she tries to turn that into profit or a career, it’s somehow seen as a lesser profession. While parenthood can inform women’s creative approaches to their work, it that doesn’t mean we should demean those approaches, which we routinely do, especially when it revolves around aspects of family or parenting.

We need to do better when representing powerful and successful women whose work falls within the realm of parenting. Language matters and so do titles. When we refer to any mother who dares delve into her family life as a “mommy blogger,” it sends a message that no matter how much success a woman experiences, whether she’s written memoirs or how-to’s, or articles for the New York Times, she’s going to be viewed the exact same way as when she started out writing for free during naptime. “Mommy” isn’t a dirty word, but it does signify work that is cutesy, not compelling.