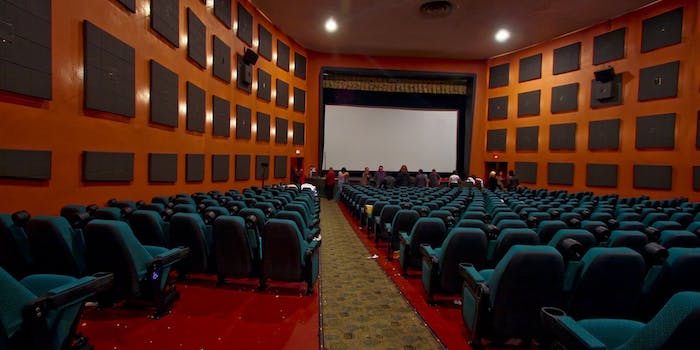 She hardly thinks she deserves to be Mom of the Year, but this story has a happy ending.

Two Alabama teenagers will regret acting obnoxiously at the movies after suffering national embarrassment thanks to a Facebook post from their mom.

Kyesha Smith Wood dropped off her teenage daughter, stepdaughter, and son at the movie theater last week for a showing of the new live-action Cinderella, and when they returned home, her son told her that the girls had been more wicked stepsisters than sweet fairy godmothers during the movie. Wood shared the whole story on Facebook.

The Jefferson County Sheriff’s Department shared Wood’s open apology on its Facebook page, at which point the story went viral.

Once the message began swirling around the internet, it finally reached it’s intended recipient, Rebecca Boyd. She replied to Wood in a comment on the Sheriff’s Department’s post.

“I am the mom from the movie theatre. I had taken my daughter to see Cinderella..I was very upset and disappointed in the girls behavior…the note from their mom brought me to tears and shows there is still good people in the world. I have no hard feelings towards them and I am proud of their parents. The girls are not not bad…they are children. Glad they are learning a lesson. I hope if my teenagers are out and they act up…I hope someone says something to them.”

The two moms are now in touch and are no doubt swapping parenting tips.

“She’s the most gracious, kind and forgiving woman,” Wood told ABC News.  She said her girls are “mortified” and are unlikely to ever do anything like this again.

Wood is being heralded as a beacon of expert parenting and a superhero mom, but she doesn’t believe she deserves the praise. She called Boyd “the real hero.”

Wood’s kids are also impressed by her mastery of the web. “Mom broke the internet,” they reportedly told her. And Wood is pretty impressed by herself, too; she apparently replied, “You’re never gonna get 180,000 likes.”