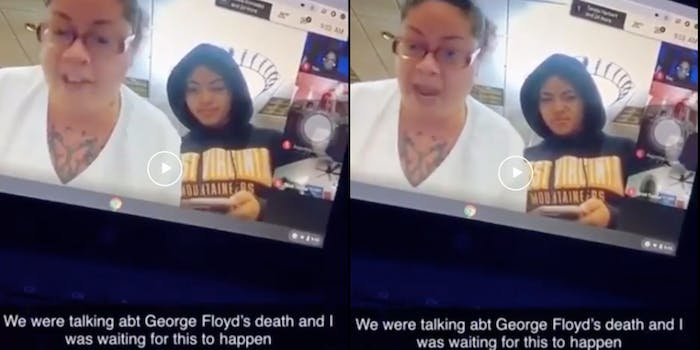 'Are you saying this because you’re white?'

A nearly one-minute clip was posted to Reddit on Monday morning showing an upset parent critiquing a teacher’s lesson during a Google Meet call. The video, which has amassed over 100 comments, begins toward the end of their IRL conversation, but it can be assumed the mom disagreed with the teacher’s remarks on George Floyd. “I don’t feel as though that this conversation that you’re having with our children is a good one,” the parent says.

“It’s 2020, you got racist-ass motherfuckers that don’t care,” the concerned mom continues. The teacher tries to jump in but is quickly cut-off by the mom’s rant. “Now you’re in school, talking to my kid about George Floyd. They ain’t got nothing to do with this. You’re having an ignorant, disrespectful conversation. ‘He wasn’t supposed to be honored.’ Are you saying this because you’re white?” the mom rhetorically asks. Then another student, who has a Trump 2020 sign hanging on his wall, pops onto the screen and says, “It has nothing to do with race.”

The mom is not amused. She then tells the teacher that they can continue the conversation over the phone or via email but that her daughter will be leaving the class for the rest of the day. “I would have happily spoken to you…” the teacher implies before the daughter leaves the chat room.

Users in the comment section appear to support the idea that the teacher made inappropriate remarks about the death of George Floyd, despite not having access to the beginning of the conversation or the class’s lesson.

“Honest question: many of you are saying teachers shouldn’t talk about politics, but shouldn’t students learn about current events? Isn’t ignoring current events a disservice to the students?” one user asks. “Yes, they should learn about politics and current events, and the death of a man in police custody is learning about justice, reforms, law, ethics, constitution, human rights, etc et. Anyone who say otherwise probably didn’t get the correct education in the first place, and lacks critical thinking,” another user replied.

“Yeah, I can’t form much of an opinion on this because it’s missing context. Although it sounds like the mom is accusing the teacher of saying GF shouldn’t have been honored, which would be disrespectful and understandably provoke some anger,” another user noted.

Others questioned whether politics should be discussed in grade school, pushing some users to quickly question how a human issue—like a cop killing a civilian—falls under political discourse. “The problem is the murder of a civilian by a cop is classed as politics,” one user said. “We want the kids to be as unprepared for real life as possible when they leave school. But by god they’ll learn the quadratic formula,” another said.

The topic of racial discussions in the classroom has been a long and ongoing debate in American education systems. In a study by the National Center for Education Statistics, it was reported that close to 79% of public school teachers between the 2017-2018 school year were white. This lack of diversity in the classroom has resulted in critique toward American social studies and history courses, which often are taught through a white lens and palliate racism to paint white American history inauthentically. Similar to the mother’s critique of the teacher’s comments, conversations about racial injustice in grade school settings should state the facts and allow students to converse among themselves, without a teacher forcing their own opinion on a group of children.