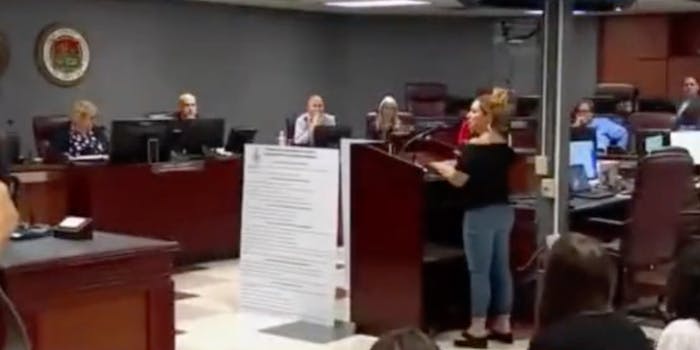 Her remarks were met with applause from other attendees at the meeting.

The public comment from the actress, who many may recognize as the mother from Good Luck Charlie, Leigh-Allyn Baker, at a Williamson County School Board meeting in Tennessee, has people online saying that she “has gone off the deep end.”

“My name is Leigh-Allyn Baker; I’m a California refugee,” she says at the meeting, her remarks captured in a now-viral video. “I gave up everything there, a … successful Hollywood career, television shows, gave it all up for freedom and to come to this friendly place in Tennessee and be greeted with open arms, and I love it here.”

After introducing herself to the board, she alleges her children have had negative reactions to vaccines in the past and says that not only will they not receive the coronavirus vaccine, but they will also not be wearing face masks.

“I wanted to tell you I have two vaccine-injured children, and they have medical exemptions because after the seizures and hospitalizations after all of their immunizations, I was granted, obviously, a medical exemption,” Baker says. “So my children are those rare children that will just not be able to get the vaccine. And still, I would never put them in a mask because their brain needs oxygen to grow, which the neurologist can confirm.”

“Anyway, the real part of the clown show [is] that you all think that you actually have the authority to mandate this,” Baker says. “Because there are these books that I have, I have them as a book for you, the Constitution and the Declaration of Independence, the Bill of Rights, the Federalist Papers, and also the Bible. These guarantee my freedom, and yours, and our children’s right to breathe oxygen.”

Her comments were met with applause from many of the other attendees at the school board meeting. However, when the video made it’s way to Reddit via r/PublicFreakout, the audience response wasn’t as supportive.

One Redditor pointed out that medical professionals—which Baker isn’t, despite having portrayed a nurse on Good Luck Charlie—have worn masks for years without problem or concern about “oxygen deprivation.”

“Doctors/nurses have been wearing masks for years and years and I’m almost certain they would not do that if it deprived them of oxygen,” u/jakedzz wrote. “Especially since, you know, they’d be the people with the best technology to test such a thing. Also, that surgeons wear masks for hours at a time (as does everyone in the surgical arena) to, you know – protect their patient from their germs.”

People also cracked jokes about the “books” Baker pointed to. “Ah yes, the Declaration of Independence.” one said, calling it a “Great book.”

“Chapter 1: Oxygen,” another joked in response.

The Daily Dot has reached out to representation for Baker.