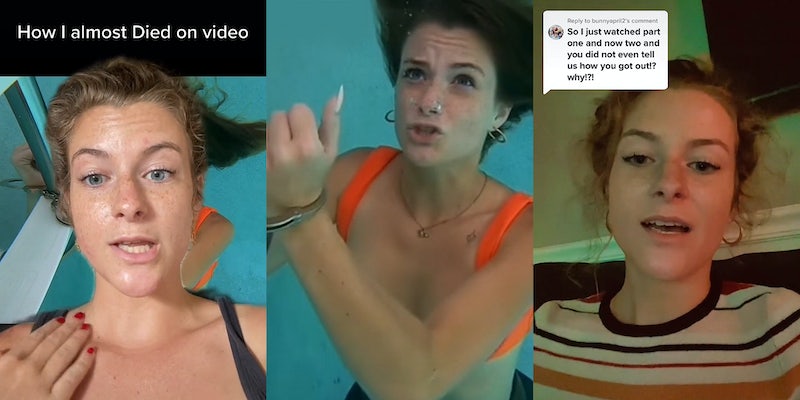 'I'm freaking out in this video for like eight minutes.'

A TikToker says that while acting in a video shoot, she almost died because she was handcuffed underwater.

Natalie Watkins (@nataliewatkinz) posted a video recounting part of her experience at the video shoot on June 1. She says she was originally told the video would be used as an intro to a movie, but when she arrived, she was told the video was actually for a fetish website.

Watkins explains she was told to be handcuffed underwater and that she would be able to slide out of the handcuffs whenever she needed to come up for air because they were large enough for her hands to fit through.

“I’m freaking out in this video for like eight minutes underwater,” Watkins says in her TikTok, which on Thursday had over 17 million views. She says she accidentally locked one of the handcuffs so that it was small enough to trap her wrist inside.

In the video’s caption, she said the experience really scared her and wasn’t worth the $600 she was paid for the gig.

In a follow-up TikTok, Watkins says she had no idea where the keys to the handcuffs were and that the man who was filming her was “sketchy as hell.” She says after she left the shoot, a friend of hers told her that someone else filming with the same man died performing the same “skit” as Watkins.

In response to comments about Watkins being able to slip her hand out of the handcuff and swim up, the TikToker said that her waist was weighted and that she was very panicked about the handcuff locking when it wasn’t supposed to because she could no longer hold her breath.

She said even though she eventually swam up with a cuff around her wrist, she was very frightened underwater before realizing she could do so.

Watkins posted footage from the final video and said that the videographer came from MMP Studios in Lakeland, Florida.

Commenters on Watkins’ viral video said thought that her having to feign drowning was a ploy to get her to engage in sex work.

“It was never supposed to be a movie intro… that’s how they trick models,” @yael_hall commented. “Once you’re there there’s a better chance of talking you into SW.”

“The fact that they lied to you about the content you were going to be making,” @fatpinksupersoaker68 commented.

Others mentioned ways that the videographer could have made the shoot safer for the TikToker.

“They should have had oxygen tank things for you so you wouldn’t have to be going up and down,” @_haken_06 wrote.

“He could have edited [the handcuffs] on!” @toriparks94 commented.

The Daily Dot reached out to Watkins via Instagram direct message and MMP Studios via email.