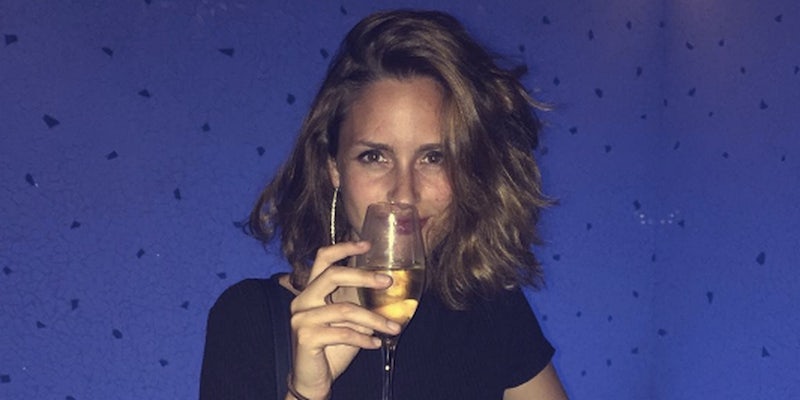 For starters, it's fake.

It’s easy to go on Instagram and spend hours salivating over the #blessed lives of the rich and instafamous, but what if some photos are hiding a darker secret behind the likes and Reyes filters? A fake Instagram account about addiction is changing the way that we look at our friend’s posts, raising awareness about alcohol dependency among young women. Imposter accounts of the Insta-variety are nothing new. A beautiful young woman with a seemingly #flawless life and thousands of followers could turn out to be an art project, as we learned in the case of Amalia Ulman in 2014, or more likely, an advertisement for perfume. Another popular account has been revealed to be a tool to trick people into paying attention to a very important message.

Louise Delage (@louise.delage) first entered the Insta-scene on Aug. 1. She hit the ground running, frequently posting arty selfies (two to three a day during high-traffic times), showing off her wide smile, hipster-chic clothes, and enviable life of party-hopping, travel, and leisure. In just a few weeks she amassed 50,000 likes, and by the two-month mark she had an impressive 40,000 followers. You could blame her popularity on her effortless Parisian cool, but no one really knew who she was… and that was the point.

See, Louise Delage is not a real person. The 25-year-old social media butterfly is in fact the center of an ad campaign called “Like My Addiction” run by the Paris agency BETC. The campaign was created for Addict Aide, to show just how difficult it is to spot alcoholism among millennials, and even friends and family. In nearly every picture, Louise has a drink in her hand, which should have been a big tip-off, right? Wrong.

“We hoped for more followers to take notice of Louise’s behavior,” BETC’s Paris president and creative director Stéphane Xiberras told AdFreak. “There were a few people who sensed the trap—a journalist among others, of course—but in the end, the majority just saw a pretty young girl of her time and not at all a kind of lonely girl, who is actually not at all that happy and with a serious alcohol problem.”

Identifying serious personal issues on social media can be especially tricky. A recent study by the University of Albany even found that excessive social media use may be tied to alcohol abuse. “Sometimes it seems, like, in this era, the more people stage their ideal life on social media, the more that serves to hide a not-so-ideal reality,” Xiberras added. However, that is not always true. (You probably drank a glass of rosé this summer, and chances are you even applied a Valencia filter and posted a photo of the frosty glass to Instagram.)

The company came clean about the project when they posted a video to YouTube and Instagram on Friday, Sept. 30.

Mere hours after the video was released, the Addict Aide site received five times their normal traffic. The video has been viewed nearly 500,000 times across platforms and the story has been covered in many other media outlets, as well as trending on Twitter. If Louise Delage was real, she would be totes jealous—talk about visibility.

“Hopefully the campaign has served as an eye-opener for some,” Xiberras told AdFreak. “I hope they will contact Addict Aide or other local organizations working to help people struggling with addiction.” The subtle signs of alcoholism can be easy to gloss over, so if you or someone you know may be veering into addiction territory, it’s important to speak up and seek help.

• The VP debate was a microcosm of being a woman

• The formula for what not to do for your Tinder pic

• What we should have asked Elaine Quijano