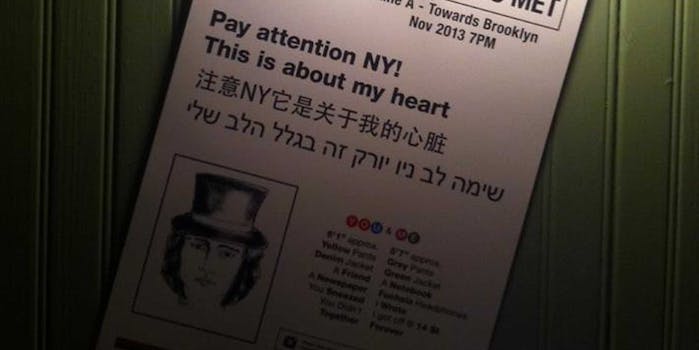 Can you help find this woman’s #missinglove?

She's not looking for love on Instagram—she's trying to find it.

It sounds exactly like the plot of a Katherine Heigl movie: Girl meets boy on the subway, girl and boy have a fleeting moment of connection, girl loses boy in a crowd. Now, girl is trying to find boy by posting fliers with his image all over New York City subway stations, asking commuters to upload photos of possible “suspects” on Instagram and Twitter with the hashtag #missinglove.

Two months ago, Chilean artist Maria Luisa Portuondo Vila was riding the train to Manhattan’s 14th Street station when she spotted a suave, top-hatted gentleman sitting across from her. According to the posters, the man was wearing yellow pants and a denim jacket, and was approximately 6’1” tall.

Although Vila says the two had an instant connection, she didn’t have a chance to give him her contact info before getting off the train, ultimately losing him in the crowd. Now, she’s trying to find the mystery man by distributing a sketch of him throughout NYC subway stations (which many have correctly pointed out makes him look like a dead ringer for Johnny Depp as Willy Wonka).


Although Vila has promoted the project as an “art action” on her Facebook page, she swears up and down that it’s not a performance piece or publicity stunt. “This is about my heart,” the poster says, in English, Chinese, and Hebrew. Many on Twitter seem to be moved by her plight, tweeting messages of support as well as a few photos of those who fit Vila’s description of the mystery man:

Happy Valentine’s Day ♥ This week I am only highlighting one person for FF @mariap_vila (#missinglove) Wishing you the best!


While we’re not sure why anyone would want to pursue a romantic relationship with a dude who wears a top hat in the first place, we wish Vila the best of luck on her search. Personally, my money is on this guy.