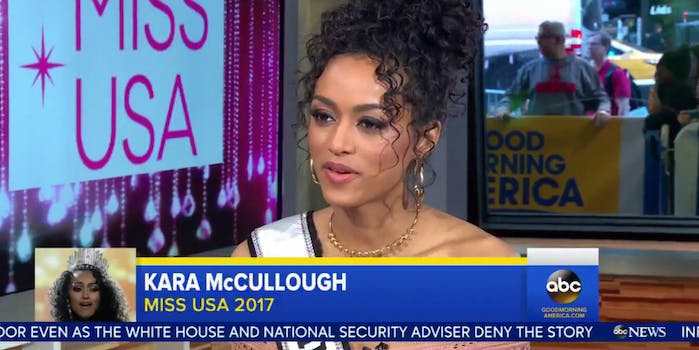 After facing significant backlash for claiming that healthcare is a privilege on national television, the newly crowned Miss USA is pivoting from her stance. Now, Kara McCullough argues healthcare is a right.

While talking with Good Morning America’s Michael Strahan on Tuesday, McCullough clarified her remarks, explaining, “Having a job, I have to look at health care like it is a privilege.”

“I am privileged to have healthcare and I do believe that it should be a right,” McCullough also said. “And I hope and pray moving forward that healthcare is a right for all worldwide.”

This is a turn from the answer she gave at the Miss USA pageant on Saturday when she was asked if “affordable health care for all U.S. citizens is a right or a privilege.” Then, McCullough, who also said she wasn’t a feminist, replied, “I’m definitely going to say it’s a privilege. As a government employee, I am granted healthcare and I see first-hand that for one to have healthcare, you have to have jobs. So, therefore, we need to continue to cultivate this environment that we’re given the opportunity to have healthcare as well as jobs to all American citizens worldwide.”

"I am privileged to have health care. I do believe it should be a right. – @MissUSA 2017 Kára McCullough "clarifies" response. #MissUSA pic.twitter.com/QCc7irmmmq

Shortly after clarifying her statements on Good Morning America, people on Twitter, as they do, began to respond. Conservatives were furious, complaining that “the liberal media” caused her to “back down.” Some even suggested that her crown would have been rescinded unless she changed her mind.

Way to go Miss Ametica….thats right, back down from what you said. You let the liberal media get to you. Your original answer was right.

Way to go Miss USA… you represented your country so well by bowing to the political correctness and changing your response.🙄You'll do well

It was only a matter of time before she walked it back. Guess the attacks from the 'tolerant left' were getting to be too much

I wonder who threatened to take her title away?

I'm sorry but she seems out of touch with people in need. Her lack of compassion is staggering

Well when you have it, it's easy to say it's a privilege that's such a shortsighted & ignorant belief system & purely selfish

right or privilege are too strong of words..healthcare should be an availability..something that is accessible whatever your income

The ongoing debate raises a larger question about the U.S.’s current healthcare situation. After passing through the House, GOP senators are working to revise the American Health Care Act (ACHA), aka “Trumpcare,” which would repeal the Affordable Care Act. As it stands, ACHA could leave millions without healthcare at all, and many more with unaffordable options—especially women, the elderly, and those with state-defined preexisting conditions.