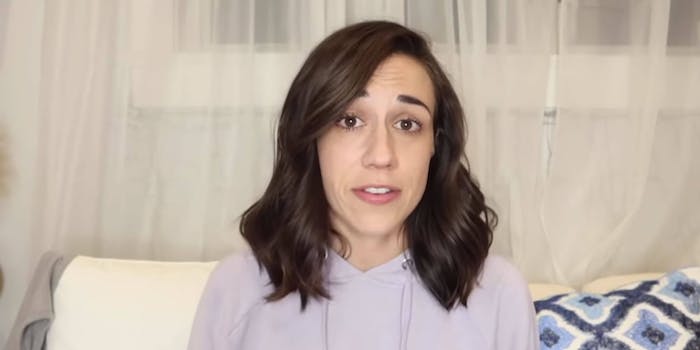 'That is not the woman who I am today.'

YouTuber Colleen Ballinger, also known as Miranda Sings, posted a video on Tuesday titled “Addressing Everything,” wherein she apologized for multiple wrongdoings, including a racist video and sending underwear to a minor.

“It is not funny, and it is completely hurtful,” she said in the video. “I am so ashamed and embarrassed that I ever thought this was OK.”

In the 13-minute video, the YouTube personality—who has over 22 million subscribers across three channels—starts with addressing a video from 14 years ago where she protrayed a Latinx woman based on racial stereotypes.

“I was a sheltered teenager who was stupid and ignorant and clearly extremely culturally insensitive,” she says. “A few years later, we realized how stupid and hurtful the video was and we deleted it. Not out of fear of getting caught, but out of fear that someone would find it and it would hurt them.”

Ballinger went on to address comments she made about an overweight woman she sat next to on a flight 12 years ago. “I watched this clip and I was shocked and appalled that these things were coming out of my mouth,” she says. “That is not the woman who I am today.” She also said she is an advocate for women and women’s bodies.

The YouTube personality also apologized to the woman whose dog was put down after the dog had bitten her, admitting she spoke “insensitively” about the incident. Ballinger explained that she felt it was necessary to apologize again and “still to this day as a 33-year-old woman” feels guilt.

She said as a comedian, she used humor to cope with hard topics without realizing how it would affect other people.

The last controversy she addressed pertains to the 17-year-old fan who alleged that Ballinger did not pay him for scripted content that he created for her “Miranda Sings” Twitter account.

Adam McIntyre from Ireland, who is a minor, claimed Ballinger sent him underwear and bras.

Ballinger admitted the allegation was true but said out of respect to McIntyre’s mother, she did not immediately address the claims. She also showed screenshots of conversations she had with his mother.

“In my mind at the time, this was no different than all the other weird stuff I send to my fans as a joke,” Ballinger said. “Now in hindsight, I see how completely stupid of me. I should have never sent that.”

“I knew better than to let someone else tweet for me,” she said. “ I should have reviewed closely every single thing that was going to come from ‘Miranda’s’ mouth. I let him know that I loved him, he did a great job. It was my fault, not his.”

She also admitted to sending him the bra and underwear, explaining that it’s a joke in the fandom and that she now realizes how “weird” it was and that she shouldn’t have done that.

“To anyone and everyone who was hurt or offended by the statements I made when I was younger, I am so, so sorry,” Ballinger said. “I hope you all can see that the person I am today is so far from the person I was a decade ago.”